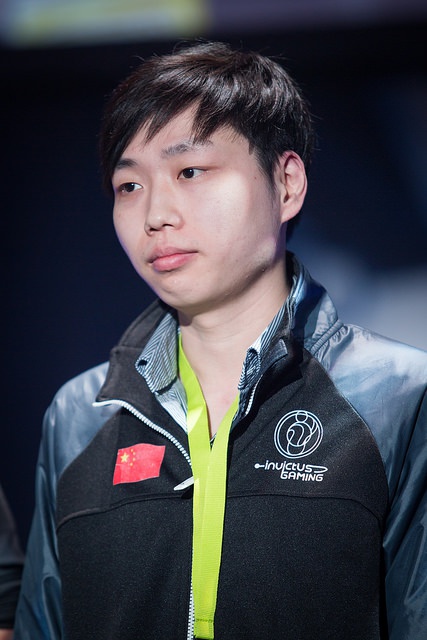 He was a former Human player from Warcraft III.

The first time he got known among the eSports-scene was when he was able to join Mousesports as he showed his quality as a gamer in a series of cups which were held by the German clan to find Chinese talents in 2007.[1]

He then lived in Guangzhou with his teammates for a while until he joined Chinese clan wNv in 2008.

Although he was training hard he could never show himself on major tournaments until StarCraft II came out.

As a strong contender for top Protoss in China, MacSed has appeared in several tournaments since China got its own servers. His most recent and greatest achievement so far has been 2 3rd places in the Chinese qualifiers for WCG 2011 and BlizzCon 2011.

He appeared at the World Cyber Games 2011 Grand Finals where he advanced out of his group. He was then knocked out by Mvp.

On January 3, 2012 it was announced that MacSed, alongside teammate XiGua, would be seeded into Code A in an future GSL.[2] He will make his GSL Code A debut, alongside XiGua, in the January Season. He was knocked out by KeeN. He would try to qualify for the next season, but fell in the final round to Vampire 2-1.

He has qualified for NEO Star League Season 1 Round of 16. He fell short to F91 in the quarterfinal 2-3.

He was seeded for Starswar 7 Chinese Qualifier 32, where he got a bye in the first round, and then defeated Xluos 2-1 in 2nd round, defeated XY 2-0 in 3rd round, which earned him the 4+4 seat for Starswar 7 Chinese Qualifier finals. He then, defeated Xiaojue 2-0, and LoveCD 2-0, but fell to Sen 2-3 in the final game, earning him a seat to Starswar 7 final nevertheless. He faced Grubby in the semifinal and after a pair of close base-exchange games emerged victorious 2-0. Then he faced Sen again in the final, in an epic series, MacSed eventually prevailed 3-1 for the championship.

At the World Cyber Games 2012 he placed 1st in his group defeating LoWeLy, YongHwa, FireZerg, and mOJON. In brackets he defeated Jim 2-0 before falling to PartinG 2-1. In the 3rd place game he defeated LoWeLy 2-0 to claim the $5000 3rd place prize.

MacSed participated in the Challenger League Invite-Only Qualifier after failing to qualify in the Premier League Qualifier, where he had lost to Oz and aLive. MacSed defeated qxc 2-0 before falling to American Protoss Bails 1-2. MacSed went on to defeat JYP 2-0 to qualify for Challenger League.

In the Challenger League Bracket Stage MacSed fell in the first round of bracket 6 to American Terran Illusion. In the Group Stage MacSed advanced first in his group defeated both TheStC and Goswser 2-1 to qualify for WCS America 2013 Season 2 Premier League.

MacSed qualified for IEM Season VIII - Shanghai after winning the Chinese Qualifier. He was knocked out in the group stage with losses to aLive and Oz.

MacSed was placed in Group D of 2013 WCS Season 2 America Premier League, with Snute, puCK and Jaedong. After a narrow 2-1 loss in his first match against puCK, he came back to take second in the group by defeating Snute and puCK in the rematch. In the Round of 16, MacSed defeated Sage 2-0 in the first match, lost to Scarlett 2-1 in the winner's match and defeated Revival in the decider's match to advance in Group C. In the Round of 8, MacSed fell to TaeJa 1-3, winning an interesting base race with a hidden phoenix. He then lost to his teammate Jim 0-2 for the placement match for the Season 2 final.

In 2013 WCS Season 3 America Premier League, MacSed was placed in Group C with Goswser, HwangSin, and Sen. After being defeated by Goswser 1-2 in the first match, he was able to advance by taking out HwangSin 2-1 and Goswser 2-1 in the rematch. In the Round of 16, MacSed defeated Oz 2-1 and Scarlett 2-0 to advance first in Group B, securing himself a spot in 2014 WCS Season 1 America Premier League. MacSed faced ByuL in the Round of 8, taking a game with an unconventional proxy robo build, but ultimately falling to ByuL 1-3. MacSed then lost to Hack 1-3 for the Season 3 final placement match.

MacSed qualified for WCG 2013 through the Chinese qualifier, the third time he has qualified for WCG. He was placed in Group C with Sora, hendralisk, Xenocider, Cham, eNjiin, and Demigod. He was tied with hendralisk and Xenocider 4-2 in match points for second place, but managed to advance from his group as he had the highest map score. In the Round of 8, MacSed faced his teammate Jim and narrowly lost 2-3.

As one of the top 8 finishers from 2013 WCS America Season 3, MacSed is seeded directly into Premier League in a group with puCK, Sen, and SeleCT. MacSed topped the group defeating Sen 2-0 and puCK 2-1. In the round of 16, he faced TaeJa, Arthur, and TooDming, and dropped out of Season 1 with 2-0 losses to Arthur and TooDming.

MacSed was placed in a group with TaeJa, MajOr, and Courage in the round of 32, and saw an early exit to Premier League after losing to MajOr 2-0 and Courage 2-1, the first time not making it to the round of 16 since his first Premier appearance in 2013 Season 2.

In Season 3, MacSed advanced from Challenger to Premier by knocking out Ryung, who defeated Squirtle in the wildcard qualifier, with a score of 3-1 after Ryung was unable to overcome MacSed's iconic Phoenix Colossus build three games in a row. This marks the fifth consecutive Premier appearance by the Chinese Protoss. In the round of 32, MacSed was placed in the group of death with Polt, Jaedong, and Oz, and made a quick exit from Season 3 after falling to Polt and Oz 0-2.

After beating Top, MacSed entered WCS Season 1 Premier. He still used Phoenix-Colossus tactics for PVT against iaguz. He played so hard. At last, he won HuK and iaguz and entered Ro16. In France, Snute gave him great pressure. After the failure to Snute, he won PiG normally. Faced with the "new" player, ShoWTimE, MacSed still paid all attention to him though he got 1-2 and lost the chance of Ro8. However, MacSed lost to Mystery in Season 2 and XY in Season 3.

As an invited player, in Season 2 of SSL, he lost to PartinG by 0-3.
He is the first Chinese player of participating in SPL as the member of Prime though he used Phoenix-Colossus tactics for PVT against Flash and lost normally.

He got 4th in Gamers Assembly 2015 because he lost to FireCake.
Through the victory against Cyan, he got the opportunity to go to USA for MGA. He lost to Hydra twice by 1-2 and won Has. The result could be satisfying.
Through the victory against Jim, he went to Maldives for WSVG. Due to the fact without Korean people, he was in favor. Though he won EnDerr so hard, he gave Rail, Ro16 of DreamHack this year, 2-0. However, he lost to JonSnow by 1-3 and got the runner-up.

He got the opportunity of participating in the tournament as the member of Mainland China. Though he lost to Bly, he still all-killed Norway and Mainland China entered Ro8. In order to prove that he is stronger than XiGua, "King of LotV", after this all-kill, he told the caster, Xiaose and F91 both in X-Team, he himself had a new nickname - "God of LotV" (虚空神 in Chinese, 神 can be both God and Protess).