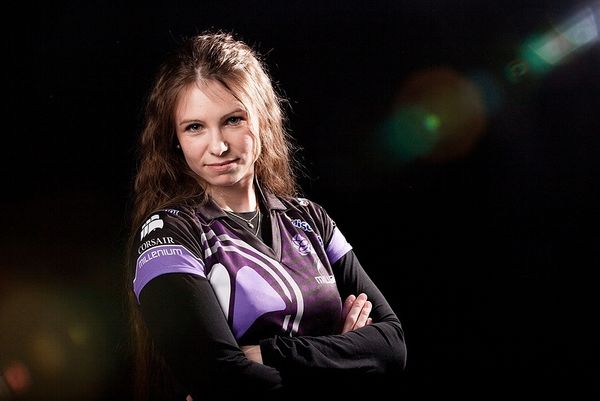 She was known as a regular participant in female-only tournaments.

Unlike most StarCraft II players, MaddeLisk has no competitive videogame background. SC2 is the first PC game she ever bought. She started to play some months after the official release of the game.[1]

On November 29, 2014, MaddeLisk received the "Gamer of the Year" award from the Swedish youth gaming organization Sverok. The award was in recognition of her efforts to make eSports more accessible to those outside of the scene.[2]

MaddeLisk realised her first achievement on June 2011, when she took the third place of the Iron Lady Champion Cup #1. She kept competing in female-only tournaments, winning an Iron Lady MousePAD Challenge on August. On December 2011, MaddeLisk left Team BX3 and was recruited by team eSahara as a member of their talent team.[1] One month later, she managed to reach the grand finals of the Ladies for the win! #2, where she was defeated by flo. She then competed in a mixed-gender event, the third qualifier for the E-Sport SM, the Swedish National Championship, where she was eliminated in group stage with a 3-2 record. She won the female ESL autumn cup 2011 and the winter cup 2012 and the Iron Lady cup #7.

In April 2012, MaddeLisk attended a premier tournament for the first time of her career, the 2012 DreamHack Open Stockholm, she also competed in the DreamHack Summer two months later. On 11 July 2012, it was announced that she would not be renewing her contract with Absolute Legends, and has parted ways with the team.[3] On 31 August 2012, Quantic Gaming announced they had signed her.[4]

MaddeLisk is also a Swedish caster, having cast for E-Sport SM in the Spring of 2012, and DreamHack Summer 2013 in English.

On December 4, 2012, it was announced that Quantic Gaming was disbanding,[5] rendering MaddeLisk teamless.

On April 26, 2013, MaddeLisk played at 2013 DreamHack Open Stockholm. In the first group stage, she defeated her first opponent Suede 2-0, but lost to Bischu and White-Ra 0-2, leaving her with a 1-2 match score and third place in the group, eliminating her from the tournament.

On June 15, 2013, MaddeLisk competed at 2013 DreamHack Open Summer. She repeated her performance from Stockholm, defeating IcookTacos but losing to SortOf and TargA to drop out of the tournament third in her group.

On August 31, 2013, MaddeLisk played against QueenE in the IeSF 2013 World Championship Swedish Final to determine who would represent Sweden at the main tournament. She handily defeated her Protoss opponent 3-0 with effective use of Roaches and Zerglings as well as a proxy Hatchery to deny QueenE's expansions. At the main tournament on November 2–3, 2013, she went undefeated in a single map to take first place, triumphing 3-0 against Akane in the finals.

MaddeLisk casted several DreamHack tournaments in 2014 with the Swedish television network SVT, including the Valencia, Summer, Stockholm, and Winter tournaments. She also casted the 2014 WCS Global Finals for SVT from the DreamHack studio in Stockholm.[8]