Marauder (Legacy of the Void) 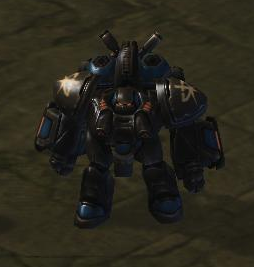 Produced from a Barracks with a Tech Lab, most of this unit's attention will be against other armored units such as the Roach or the Stalker. Being almost the opposite of a Marine this unit is meaty and slow firing, and will take some attention during battles to make this unit target Armored units to do full damage. Supplementing this is the Marauder's long range and heavy damage every individual shot. Their health and armor make them somewhat better of a meatshield than Marines as well.

Marauders are effective at the front of an engagement to take damage for Marines and then be healed by Medivacs; known collectively as MMM or Terran Bio (Barracks). It is not a massing unit like the Marine and Siege Tank, because it has a slight delay on its projectile attack (like the Stalker and Roach it counters) that takes a while to hit the opposing unit and can miss: usually from the opponent unit dying, Blink/Burrowing, etc. can dodge hits or overkill targets.

Marauders can be upgraded with Stimpacks and Concussive Shells from a Tech Lab connected to a Barracks.

These upgrades are researched at the Barracks' Tech Lab.

With the Concussive Shells upgrade, Marauders can kite many non-massive units with ease. This makes them highly effective against early- and mid-game compositions from any of the three races, and allows them to retreat fairly easily, as no concussed unit is faster than a Marauder with Stimpack. Combined with their bonus against Armored units and considerable health, they are generally the heavy lifters of a Terran biological army.

With their high health and better armor they can be sent to the front of a Bio army to tank melee units, although they are not effective damage-wise against what are light and mobile assailants.

The Marauder is one of the key components of a Bio-heavy unit composition. The Marauder's extra damage against Armored units is particularly effective against Stalkers and Colossi. Additionally, Marauder Concussive Shells will prevent a retreating Protoss army from getting too far, then allowing the Terran player to hunt them down if they have enough forces to do so. Approaching Zealots without Charge can be kited with the additional help of Stimpack.

Without the armor damage bonus, they deal rather less damage to Zealots however, and pure Marauder blobs can be defeated by Zealots with Charge, necessitating the more versatile Marine. Powerful support options in the later game such as the High Templars' Psionic Storms or Colossi with Extended Thermal Lances that complement Zealots rip through them as well, although they tend to fare somewhat better than Marines. Marauders tend to still be useful in the late-game however when the focus of Terran production is to deal with a Colossi and Stalker ball, where Marauders can be clean-up duty with Vikings hunting Colossi.

Marauders can be even more effective when their attack bonus is combined with the benefits of a Ghost's EMP to take down heavy units like the Immortal, demanding less additional Marines. However, despite the Marauders being able to kite and deal great damage against Disruptors, once they begin to clump up, it's getting more and more difficult to dodge Purification Novas.

Commonly seen in Bio vs. Mech or Bio-Mech vs. Mech games, Marauders are typically mixed in with Marines for the following reasons:

In Bio-Mech vs. Bio-Mech games, Marauders are often times forgone entirely, as they are both resource inefficient and supply inefficient against Marines in large battles.

Due to its bonus damage against Armored enemies, the Marauder is very effective against Roach based armies, especially when paired with Medivacs. Against the common Zergling-Baneling-Mutalisk composition, adding Marauders into the Terran army forces the Zerg player to target-fire the Marines with the Banelings rather than simply attack-moving them (else they will inefficiently detonate on Marauders). This also allows the Terran player to more easily split Marines against the Banelings, as the Zerg player will have to manually target different groups of Marines with the Banelings rather than allowing the A.I. to do it automatically via an attack-move command.

Marauders are weak against Zerglings, so it is important to keep them supported by Marines and/or Hellbats to prevent them from being quickly surrounded and killed.