Marine (Legacy of the Void) 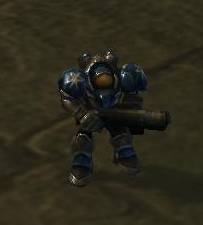 Marines are the all-purpose infantry unit produced from a Barracks. Having the quickest and cheapest production of all Terran units make the Mineral backbone that scales very well with Stimpack, Engineering Bay upgrades and Medivacs from the Starport. Before Stimpack, Marines are less than effective against Zerglings and Zealots; at least one Bunker and Supply Depots to wall-off is recommended for the early game.

However, Marines can take advantage of kiting and Stutter Stepping from distance. In the Mid-Late Game, high health Marauders or Hellbats can be used to Tank damage for the lower health Marines. Medivacs can also Load 8 Marines per ship to harass the opposing bases and use unpassable ground to retreat behind safely.

Stimpack can be researched from a Tech Lab connected to a Barracks and can then be used on Marines and Marauders, at the cost of 10hp and 20hp per stim. Note that using Stimpack when it is already in effect does nothing but refresh the duration.

These upgrades are researched at the Barracks' Tech Lab.

Marines gain an additional role once Medivacs are added to the Terran army. Protoss units generally benefit from being near each other and supporting each other, leading to a Death Ball style of play. By loading small groups of Marines into Medivacs, you can stop Protoss from taking riskier and distance mining bases too far out the way for a ground army to defend effectively.

Marines are often the core component of a TvZ army. Siege Tanks accompany the marines to thwart Banelings and make casting Fungal Growths more difficult or to contain such units as the Swarm Host or Roach. If one loses their Marines, Mutalisks will reign superior and either kill all your units and end the game, or contain you and gain superior map control. Once upgrades and Medivacs come into play, Marines will be very effective against Zerglings and Mutalisks, therefore requiring the Zerg to increase the Baneling count.

Marines are good with: