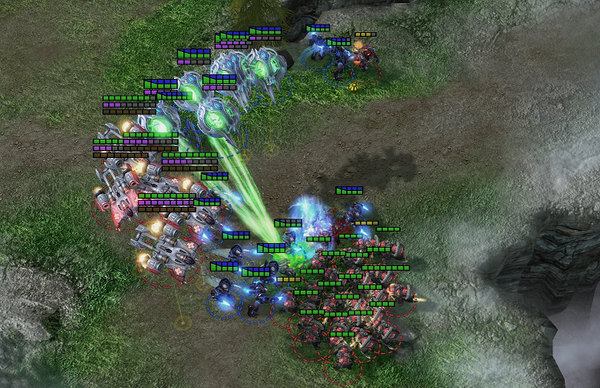 Since its introduction to the game the Oracle has mostly been seen as a harassment unit, and was designed as such by Blizzard as they felt Protoss did not have enough harassment potential during Wings of Liberty. However, the Oracle can also be used in larger numbers as the core of your army with upgraded Zealotss as supporting units. This guide shows you how to make a push at 10:30 with 6 Oracles and a dozen +1 Armour Chargelots while transitioning to a Chargelot/Archon/High Templar composition ready for the late-game.

In the early game, your goal is to 1 Gate Stargate FE behind Oracle harass. If you see an SCV scout your base early, be sure to tail it with one probe in case he tries to Engineering Bay block your natural. The Stalker will then be used to deny further SCV scout, and keep Reapers from killing your Probes. As soon as you take your expansion, send a Probe to scout if he has a second base. This is important because if he does not, you need your Oracle at home to defend aggression, as this build does not get the Mothership Core. If he expanded, go harass his mineral line and see what you can do. Do not lose the Oracle, since you need it later for the big push. Remember your basics of Oracle harass :

The goal here is to build up to 6 Oracles, get charge, +1 armor and 6 Gateway, to set up for a big push on his natural, while building your economy and defending potential aggression. In this phase of the game, you do not want to get any more units than you need to, because it would delay your push. So, play the Zerg style : position a scout at the Xel'Naga Tower or in the middle of the map, and build only what is necessary to hold whatever is coming.

As your gates are on the way, gather your Oracles, and whatever units you have (at least a Stalker from early game) and set up a proxy Pylon near his base. You are ready to go but, just before attacking, prepare your transition into Chargelot/Archon/HT : get your 4th gas, drop the Templar Archives, continue to work on upgrades.

Then warp-in Zealots, and go attack. Note : if you did not warp in any units in the midgame phase, you want to wait for a second round of Zealots before going, as Oracles die quite fast without a meatshield.

Usually, Terrans will have a handful of Marine/Marauders and 2 Medivacs. He could be setting up for a 2 Medivac Stim push for example.

Transitioning into the Late Game[edit]

The easiest transition available is Chargelot/Archon/High Templar, as you do not even have a Robotics Facility up yet. Be sure to throw down your tech before attacking, because you will be so busy microing afterwards that your transition will be poor if you do not. You will need to get a Robotics Facility eventually to add Colossus to your composition as he gets Ghosts, but this is straightforward PvT late game from this point on.

This build does not get you many units, and you do not have the MotherShip Core either, so it is important to react accordingly to what is coming.

When you confirm that he is 1-basing, do not forget to keep your Oracles at home, and get whatever units you can from your Gateways, but you will probably have to make do with 1 Stalker, 2 Zealots, and 2 Oracles. As soon as you see his Medivac, try to position your Oracles at his landing point. Focus the mines before they burrow, but if they do, move your Oracles away and activate their detection to clean it up.

You will have to deal with that with few units as well. When you confirm that he is 1-basing, a good rule of thumb is to keep all your Probes in the main to defend more easily. You can then kill the drop with your Oracles, while the Hellions have nothing to kill at the natural. Then re-secure your natural when the threat to your main has been dealt with.

The best reaction is to use an Oracle for detection, and buy time with your Stalker until you get a phoenix out. The Oracle/Phoenix team will allow you to deal with Banshee harassment. But at this point, you cannot go on with the initial plan, because it is not great vs mech. You need a Robotics Facility for Immortals and reliable detection, and the Mothership Core to help counter a potential 1/1/1 Banshee/Tank/Marine all-ins as soon as possible.

Here are several examples of this build in action:

Note from the author: "I'm only master level so, please forgive me if the execution is not flawless"