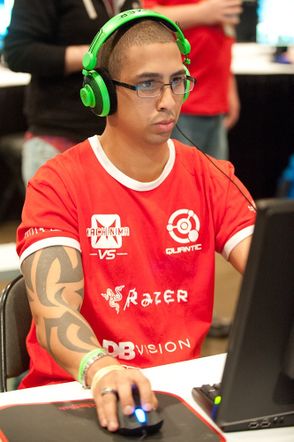 Jeffrey "MaximusBlack" Johnston is a popular YouTube commentator. He is a Protoss player and is currently retired.

MaximusBlack's popularity grew from his involvement with the LifesAGlitchTV[1] YouTube channel, which he uses to create gaming content with his friend and co-caster NovaWar. While he produces content other than just StarCraft II on that channel, it was their 'When Cheese Fails'[2] series documenting amusing failures of various cheese builds that first began MaximusBlack's huge rise in popularity within the StarCraft community.

While he began his work with NovaWar on LAGTV primarily on a part-time basis, he transitioned into a full-time YouTuber with the introduction of his personal YouTube channel, MaximusBlack.[3] His personal channel expanded into other genres of gaming, ranging from Starcraft to several other well-known and distinguished game titles.

Apart from his work as a YouTuber, he regularly streams on Twitch TV account, LAGTVMaximusBlack [4] where he interacts with the community and plays various game titles almost on a daily basis.

During late May and throughout June of 2013, MaximusBlack also played League of Legends on his stream frequently, ranking up from Bronze to Silver league, and as of June 30, 2013, he is on a "Quest To Gold". Much of these League of Legends "quests" have also been uploaded to his YouTube channel.

On December 27, 2013 he started leveling a new Blood Elf warlock character in World of Warcraft, having never played any MMORPG for any significant length of time before this. He started streaming his WoW gameplay every day for up to 10-12 hours a day, which brought him increasing popularity, making him the 3rd most popular WoW streamer on Twitch.tv as of January 6, 2014.[Citation needed]

His StarCraft II progression has been watched by thousands of fans through his series 'Quest to Diamond/Masters/Grand Master'[8] and his live streams which document ladder games as he improves.

MaximusBlack attended MLG Anaheim in June 2012, losing his first match against CheckSix teammate ThisIsJimmy.[9] In losers he won his first match in a major tournament by defeating bmonarch 2-0 before falling to Gretorp in losers round 2

On December 20, 2012 MaximusBlack announced he would be joining It's Gosu eSports.[13]

On February 1, 2013, MaximusBlack was reacquired by Quantic Gaming after the team reformed by merging with It's Gosu and 4Not.[14]

On May 6 of that same year he left Quantic Gaming, citing personal sponsorship opportunities,[15] and would be officially sponsored by Ozone Gaming Gear the next day.[16]

On June 28, 2013, MaximusBlack was featured on the front stage against NonY for the first time at MLG Anaheim, losing 2-0 in a Best of 3. The next day, he lost 2-0 in another Best of 3 to mYiPengWin, and was then eliminated from the tournament.

On October 20, 2013, MaximusBlack made it to the finals in the FragForCancer charity event and went against PeNguiN in a close match up, losing 4-3 in a best of 7.