Medivac (Heart of the Swarm) 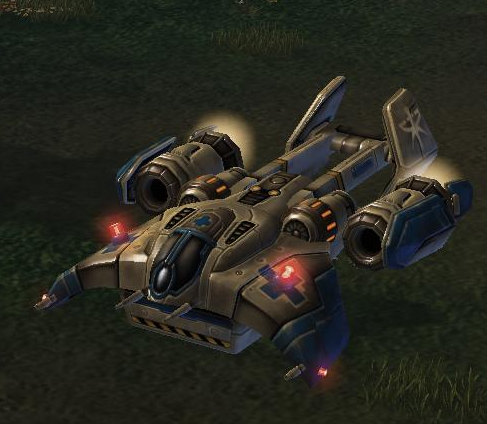 A dual purpose Dropship and Healer (3 Health per second) and can be produced right away from the Starport with the Ignite Afterburners ability ready right away. Ignite Afterburners increases the Medivacs movement speed to 4.25 (faster than a Mutalisk and equal to a Phoenix, for a quick escape or running past anti-air units and defense.

As part of the Marines, Marauders, and Hellbats unit composition, the Medivac will heal units Stimpack damage fairly quickly but takes much longer to heal low health units, make attacks quick and brief to not wear through the energy too quickly. Dropping from Medivacs is only possible if you can retreat quickly

The Medivac can drop numbers of Marines and Marauders and then support them with heals to make the drop even more dangerous. They can also move Siege Tanks, Hellions and Thors allowing for many options for harassment, be it shelling a base from a cliff or dropping Hellions into a mineral line to deal large economic damage. Oddly Vikings in Assault Mode can also be loaded into a Medivac, though this is rarely done.

Medivac AI handles attack commands differently than a standard combat unit. When given an order to patrol, force fire or attack-move (by themselves or in a group with other units) they will stop to heal any damaged infantry in their proximity. They will also stay close to any infantry actively attacking an enemy unit/building, regardless of whether those infantry need healing or not. Their Heal autocast skill is treated as the Medivac's 'attack', and its targets of choice are infantry that are damaged or in combat. When all infantry are dead, or stop attacking the enemy, the Medivac will remember its last ordered position and move there. Give them a move command, or take Heal off of autocast, and a Medivac will go directly to any location ordered.

Note - StarCraft II combat AI has assigned Medivacs the same priority for attack as any other "standard" unit, resulting in distance being the only factor for target selection. This can be beneficial as it diverts fire from your army, but detrimental in the case of drops, as hostile units will not switch to unloaded units until their first choice is either dead or out of range; your army can be left stranded if the Medivac is not micromanaged effectively.

This comes out to about 9 hp/s (in game time) or 13.5 hp/s (in real time). The minimum required energy to start the healing process is 5, in order for an EMP Round or Feedback to have a slightly longer lasting effect.

This spell also works on friendly biological units in team games. This is particularly effective with a Zerg ally as all Zerg units are biological meaning that medivacs will automatically heal injured Zerg units.

These upgrades are available from the Starport's Tech Lab.

Medivacs can be used tactically to get Tanks to places they wouldn't be able to reach otherwise. A good example of a map that benefits from heavy Medivac usage is Kulas Ravine, which features cliffs overlooking many important positions. Prudently placed and timed drops when combined with the healing capabilities of the Medivac can be extremely powerful in all match-ups.

Just like in TvZ, Medivacs are brought with a Terran bio army to provide healing support. They are also frequently used to drop the Protoss and snipe important infrastructure (Nexus, probes, pylons, tech structures). They are also used in TvP for Hellion/Hellbat drops.

Medivacs can serve a similar role to Dropships from BW, but their usage has decreased. Since most Terran armies now contain some component of anti-air such as Vikings or Thors, Medivacs are now much more likely to get sniped and can be hunted down easier, so they're not used as much to transport the slow moving Tanks around.

Medivacs are usually combined with a Terran army in order to provide healing support for the Marines in the Marine-Widow Mine style that is popular in TvZ. Aside from that, they can also be used to drop units, typically Hellbats, in the opponent's base.