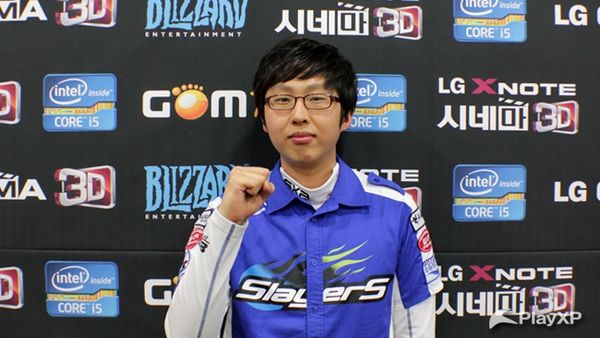 Min is a former Zerg Brood War Player who spent four years trying to get into Brood War gaming team SK Telecom 1. However, due to economic challenges in the family, Min had to drop out of the team to earn money.[Citation needed] He started playing SC2 since the beta and started off playing Terran for the Prime team. However after reading an article describing how the Zerg players were struggling at the time, he decided to switch race to Zerg.[Citation needed] After doing so, he lost 1000 points on the ladder.

He was invited to the SlayerS tryout tournament because he was a former SKT1 player. He won the tournament out of 64 players and was accepted into the team.

Min started playing as a Terran Player and he made it to the Qualifier Finals for GSL twice. He then switched to Zerg because Zerg were struggling at that time and he was inspired by Zerg players on higher ranks. After that he participated in the tournament for the SlayerS tryouts which he actually won. Because of that he was able to join the Team. In GSTL May he was able to beat Code S Player InCa before he lost to oGsTOP in a very close game.

On July 2, 2012, Min was able to qualify for the first StarCraft II OSL through the Non-KeSPA Preliminaries, in which he beat Sparta, Leenock, Sculp and DeParture to secure the spot. Min retired from Starcraft II and switched to League of Legends in October 2012, as SlayerS disbanded.[1]

His first showing in Code A May would see him defeat TheBest 2-1, but fall to Mvp in the Round of 16, keeping him in Code A for the next season. In Code A July he wasn't able to win against YoDa in the Round of 32 and so he dropped out of Code A.

On June 29, 2011, Min participated in the ESV TV Korean Weekly Season 1 Weekly 2. After taking down BanBans, Yong, Seal, and Killer, Min went on to face TanDongHo. He was not able to advance any further after he lost to TanDongHo by a score of 1-3 and fell in to the 3rd/4th place match. Min once again wasn't able to grab any more victories and had to settle for fourth place after losing to PuMa by a score of 0-2.

On October 13, 2011, Min participated in the ESV TV Korean Weekly Season 1 Weekly 12. After taking down Fake, Galaxy, Seal, and ByuN, Min went on to face TaeJa. He was not able to advance any further after he lost to TaeJa by a score of 2-3 and fell in to the 3rd/4th place match. Min once again wasn't able to grab any more victories and had to settle for fourth place after losing to ForGG by a score of 0-W.

Min and LosirA both share the same name "Hwang". After Min's mother watched LosirA all-kill SlayerS, she told Min to "never get behind him (LosirA)".

In SlayerS, Ryung is Min's rival, because they played Brood War together, became semi-progamers on the same day, joined the Prime clan together, and then joined SlayerS together.