Minerals are the main resource in StarCraft Universe. It is the only resource needed for low tech units such as Marines, Hellions, Zealots, Zerglings, Queens or Harvesters, and also for many buildings such as Barracks, Gateways, or Hatcheries. Harvesters mine 5 minerals per trip, eventually depleting the mineral field.

Unlike in StarCraft: Brood War, workers will automatically spread out among mineral fields. This makes harvesting minerals much easier.

Still, a mineral field can only support a limited amount of workers at a time. In addition, if a worker attempts to mine from a field that is occupied by another worker, that worker will instead select another field to mine from (unless the worker is almost done harvesting from the field). Consequently, players can be found to 'harass' an opponent's mining workers by sending a worker out to mine their minerals. This action prevents the enemy's worker from mining as the field would then be occupied. HuK is particularly notable for this sort of harassment.

Also, a harvester will sometimes switch to another mineral field if their current field becomes occupied, wasting time traveling instead of mining. Players can remedy this by manually balancing their patches with 2 workers per field, but it may not be worth a player's time to micromanage mining workers as workers will self-balance anyways.

Finally, travel distances vary among mineral fields, with some fields closer to the base than others. Therefore, players may attempt to further maximize mining efficiency by forcing workers to first saturate the closer fields (done by selecting a worker and repeatedly telling it to mine a given field until it starts mining there). Having any more than two workers on a mineral field will force the third worker to move to mine another field instead, unless they are also over-saturated. This strategy is also incentivized because the closer fields have about twice as many minerals, so they will last longer than the smaller/further fields. 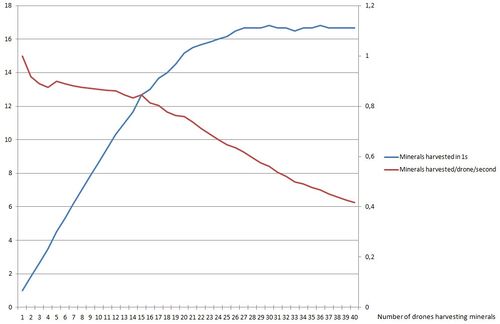 This chart represents the number of minerals a group of workers can harvest on a "standard" base. Zergs Drones were used, on Lost temple. All Drones were gathered on a specific spot, then clicked on the middle mineral patch, and the mineral count was taken after 30 seconds. The Game Speed was set to Faster. Note that this chart is using real-time instead of game-time, so the mining numbers are roughly 20% inflated.

More measurements and math in this reference: (1) https://tl.net/forum/viewmessage.php?topic_id=140055

Keeping more than 3 workers per patch is a complete waste. The 4th worker will not give you any additional income. Your income/worker ratio is reduced, strictly speaking, but your absolute income is not any less, of course.

The progression of minerals harvested per second is roughly linear (the only variation coming from patch distances, but this is minor) until you have 2 harvesters per patch.

MULEs do not factor in, as they are able to a mine a given mineral patch at the same time an SCV is.

However any patch with 3 workers will yield exactly the same rate regardless of distance. This is because the limiting factor becomes the time "on" the mineral patch, while the difference in travel distances is nullified by having a worker that is always waiting to be "on" the patch.

Because the marginal income rate of third worker of a patch is less efficient than the first two, transferring all of the third workers to a newly completed expo is ideal. However, when there are two or one workers per patch, transferring has no short-term improvement in mining efficiency, since those workers would mine at exactly the same rate as they would have if they stayed. There is actually a loss of money due to the non-mining time (generally about 10 minerals per worker). But transferring without having any third worker is only done so with the long-term goal of saturating all bases in the shortest amount of time in mind, not just one.

Here is the worker transfer equation, which determines the time it takes for a worker to break even by transferring:

t = time to break even

The following is a table of the time to break even for transferring workers with an assumed 15 second travel time:

Since a gold mineral patch will yield a 140% rate compared to blue minerals (7 minerals per trip compared to 5), transferring at least 12 harvesters (6 patches x 2 harvesters) ASAP is ideal, even if there are only 2 or 1 worker on all of your patches currently.

There is a loss in efficiency due to lost mineral income during the transfer period. The derivation and formula to calculate the time to break even after a worker transfer to a gold expansion is detailed below:

MPM1-2 = The mining rate per minute of the first and second worker on a mineral patch.

MW1-2 = The number of first and second workers on the regular mineral patch you are transferring.

MPM3 = The mining rate per minute of a the third worker on a mineral patch.

MW3 = The number of third workers on the regular mineral patch you are transferring.

GPM1-2 = The mining rate per minute of the first and second worker on a gold mineral patch.

GW1-2 = The number of workers transferred that will be first and second workers on the gold mineral patch.

GPM3 = The mining rate per minute of a the third worker on a gold mineral patch.

GW3 = The number of workers transferred that will be third workers on the gold mineral patch.

tm = The time in minutes it will take for the workers to travel to the gold expansion.

Tm = The amount of time that has to pass (including transfer time) to break even with the transfer.

The amount of minerals mined at the regular mineral patch if no transfer is done is equal to:

The amount of minerals mined at the gold mineral patch if no transfer is done is equal to:

But we also need to subtract the transfer time which makes the formula:

To find the total time needed from initiating the transfer to breaking even we set the formulas equal to each other and solve for Tm:

So, assuming the following is true:

Then we are modeling transferring twelve workers from a base with 24 workers and 4 patches remaining to a fresh 6 patch gold expansion where it takes 30 seconds for the workers to travel:

Note that this includes a 30 second transfer time which means your workers only need to mine uninterrupted for approximately 44 seconds after the transfer is complete in order to catch up.

A very close gas geyser may collect gas faster when having only 1 or 2 workers on it, but once they get a 3rd, the rates become exactly the same, due to the waiting of a worker at all times.

Very far gas geysers (common on some maps) may actually require 4 workers for full saturation, although having 3 workers on such a geyser results in only a ~10% decrease in your gas output. These geysers are generally the "far corner" placements. You can usually notice easily that the geyser is farther than normal.

Return on Investment A worker will return a mineral advantage 92(±2) seconds after the initial investment is made (when it is put in the build queue), as long as there are less than 2 workers per mineral patch once it finishes. After partial saturation (in this case, 2 workers per patch), each worker will return on its initial investment 153(±4) seconds after the initial investment. In such cases, when an alternate base is available, it may be best to send workers there if that base is not saturated to two workers per patch yet. These numbers remain valid as long as the worker is built from the base location adjacent to the mineral patches, and as long as those minerals are standard yield minerals.

For Protoss, a fully chrono boosted probe will realize its investment 6 seconds earlier, due to the reduced build time.

Comparison of Types of Expos[edit]