Missile Turret (Legacy of the Void) 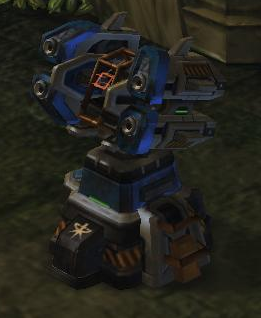 The Missile Turret's attack is about as powerful as four Marines. The twin attack (12x2) makes it less effective against high armor targets such as Battlecruisers but despite this setback, Missile Turrets still deal more DPS per cost than the Photon Cannon or Spore Crawler. Although they cannot out-range Carriers, the Missile Turret's high damage and endurance is still very potent for clearing out Interceptors.

A few well placed Missile Turrets can fend off Banshee harass in the early game. Since a Missile Turret can detect farther than it can shoot, it is still useful when the Cloaked Banshee is out of range. A small group of stimmed Marines can run up to a detected Banshee and shoot it down if the opposing player does not pull back immediately.

Turrets are also commonly used in conjunction with Siege Tanks to fortify a position. When deployed in the field, they can assist Vikings in the air battle or detect cloaked Banshees and Ghosts.

A handful of Missile Turrets can effectively hold off large numbers of Mutalisks and is recommended for protecting your vulnerable SCVs. When under attack, your SCVs can repair the Missile Turrets, increasing its longevity. However, this guarantees that the Mutalisk's Glaive Worm attack will bounce from the Missile Turret onto the SCVs.

The Missile Turret is also able to spot burrowed Infestors and Roaches, which can prevent a potentially disastrous sneak attack on your mineral lines.

Missile Turrets can minimize damage taken from Dark Templar, and can also be used to ward off Phoenix harass. They are decent against uncharged, lone Void Ray attacks, but fall extremely quickly to multiple charged Void Rays. They are a strong choice to defend from Oracle harass, placed in close proximity to mineral lines.