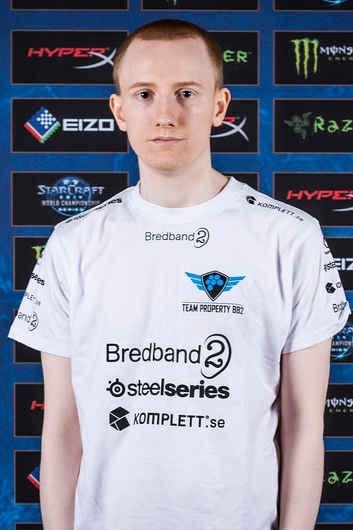 Stefan "MorroW" Andersson is a retired Protoss player from Sweden, who previously played for Team Property. In Wings of Liberty, he was a race switcher, with the preferred match-ups of ZvP, ZvT and TvZ. For Heart of the Swarm, he switched to Terran only, and finally, during the beta of Legacy of the Void, decided to switch to Protoss.

MorroW was considered to be a new player on the scene, only joining the higher levels of the Brood War community in late 2008. Despite this he managed to get some success, amongst other things he managed to finish in 2nd place on the TSL2 ladder.

In Wings of Liberty, he was known for playing an economical, pressure based Terran style epitomized by his 5 Rax Reaper build into expand which he used extensively in the later parts of the IEM Season V - Global Challenge Cologne. He later switched to Zerg, keeping his fondness for economic games, often playing a fast expand style, and become renowned for his midgame macro play as a result. Just prior to 2011 MLG Pro Circuit/Columbus he decided to become a race picker, playing ZvP, ZvT and TvZ (when possible).[1]

MorroW had a successful beta, employing an economical style focusing on mech units, most successfully against Zergs. He won several events, including two CraftCups and ZOTAC Cup #15. His successes during the beta were mostly overlooked by the community since his wins came in the weekly tournaments and not the high profile invitationals.

MorroW initially found success by taking IEM Global Challenge Cologne, the first major SC2 LAN tournament. MorroW received an invite to the tournament as a replacement for original invite, Brat_OK.[2] MorroW upset fan favorites such as TLO and DIMAGA to make the final where he would defeat IdrA with controversial heavy Reaper usage.

In late September 2010, he began his switch from Terran to Zerg. While MorroW soon practiced Zerg exclusively he would only slowly phase out his Terran in competitive play and did not make a full switch until the turn of the year. MorroW's first major tournament achievement representing the swarm would be placing second in SteelSeries StarCraft II Challenge during Assembly Winter 2011. He would however fall hard to Ret in the finals when the latter exposed some agonizing weaknesses in MorroW's ZvZ.

MorroW was one of the 50 players invited to participate in the North American Starleague. He placed third in Division 1 behind Moon and Sheth and twelfth in the group stage overall. MorroW went on to beat out Socke and NaDa in the qualifier bracket to make the playoffs, where he was knocked out immediately by July. In early June MorroW returned to using the Terran race versus Zerg due to struggling in the Zerg mirror match-up. His decision was made easier by his unique understanding of ZvT stemming from playing both races at the highest competitive level. He has since used TvZ in the Swedish WCG qualifiers, 2011 SHOUTCraft Invitational and DreamHack Summer.

In fall 2011, MorroW was invited to the North American Star League Season 2. He won his division with a 6-1 match and 12-5 game record, putting him at the top spot of Division 3. This would qualify him for the NASL Season 2 Offline Finals. At the finals, he faced teammate MaNa and defeated him 3-0. In the next round he would face yet another teammate, ThorZaIN. MorroW would lose to his teammate 3-1, eliminating him from the tournament.

In November 2011, mousesports announced that MorroW was going to practice in the progaming house of team New Star HoSeo for about three months, where he would be training for the North American Star League Season 2 Finals and the World Cyber Games 2011, and would compete in the GSL as well.[3] MorroW would be seeded into and play in the 2012 GSL Season 1 Up and Down Matches where he would end up going 1-3 in his group, beating Ryung. In his following Code A Ro48 match he would face off against Maru, losing 0-2.

On June 27, 2012, MorroW left mousesports.[4] He later jokingly posted on TL.net that he was forming a team with ICA (a Swedish supermarket franchise) as the sponsor together with many other at the time teamless Swedish players, such as NaNiwa and MaddeLisk.[5]

From the moment he gained access to the HotS beta, MorroW started playing mech-style Terran all the time, and on November 14, 2012, during TeamLiquid: Attack!, Morrow announced he had switched to Terran full-time [6]