Mouse settings are critical when playing Starcraft 2. The various settings can be confusing, so this article has been written to explain the settings means and how changes affect gameplay. This is particularly important to computer gamers that play on tournament or LAN computers and must adjust settings to personal taste quickly.

CPI (counts per inch, often erroneously referred to as DPI -- dots per inch) is the scale at which a mouse converts physical distance to digital counts.

The CPI of a mouse correspond to how many movement counts are sent from the mouse when it is moved one inch. Without modification on the counts by the system, moving a 800 CPI mouse one inch horizontally should theoretically shift the cursor by 800 pixels in the same direction. Effectively, higher CPI will result in a more sensitive cursor. CPI is merely a conversion scale used by the sensor internally, and is not related to its frame-rate in any way.

Higher CPI offers a faster cursor without sacrificing any precision. Turning up the sensitivity in Windows increases the speed but reduces the precision of the cursor. Increasing the sensitivity this way causes Windows or the game to take the number of pixels the cursor should have moved and multiply it. Thus, there are certain pixels where the mouse cursor cannot land. For example, if you multiply the mouse input by two, you'll never get an odd number. Only changing the CPI can change the cursor speed without losing precision; this is why many mice include on-the-fly CPI switching. Some mice be set up with custom profiles between which the user can switch. Most gamers prefer low CPI for first-person shooter games and high CPI for RTS and MOBA games.

Because CPI is based on pixels, monitor resolution plays a role in the perceived sensitivity of a mouse. A 1000CPI mouse will move the cursor 1000 pixels across the screen when the mouse is moved one inch. On a monitor running 1024x768 resolution, moving the mouse one inch horizontally will roughly move the mouse from one side of the screen to the other. On a 1920x1080 monitor, the cursor would move only about halfway across when the mouse is moved one inch. The higher the resolution of the monitor, the slower the mouse cursor will appear to move. 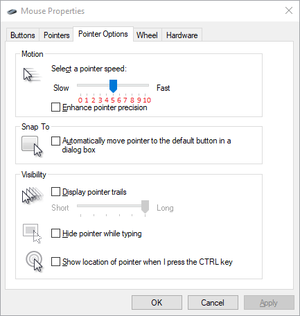 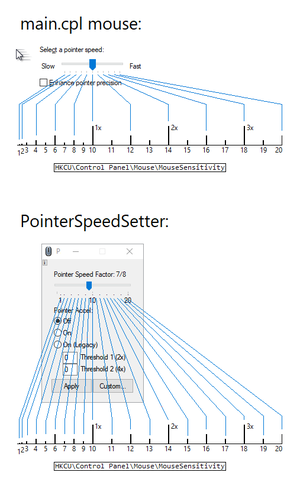 For maximum accuracy and minimal distortion, you should set your Windows Pointer Speed Setting at the central notch and disable "Enhance Pointer Precision," as shown in the image to the right. These settings are found in Window's Control Panel.

Disabling the "Enhance Pointer Precision" button might not fully disable acceleration in some older games; see below for further details.

Windows has 20 mouse sensitivity levels. At the setting of 10 (middle notch in Control Panel, shown as 5/10), the multiplier is 1 (i.e. for every one mouse count your computer will move the pointer one pixel on your screen).[1] Non-integer multipliers, contrary to popular belief, do not affect accuracy. The rounded residuals are handled by an accumulator. However, a MouseSensitivity setting of greater than 10 will cause pixel skipping and slightly reduce the precision of the cursor.

In Window's mouse settings, under the pointer speed slider there is a check box called "Enhance pointer precision". This is the Windows term for mouse acceleration. It is enabled by default. Mouse acceleration increases the cursor speed based on the velocity of the mouse, i.e., the faster the mouse is moved, the faster the cursor moves. This means Windows is artificially adjusting the input of the mouse.

Certain players prefer to have acceleration enabled, but it is typically recommended that mouse acceleration be turned off. Universally constant mouse movements facilitate better imprinting on muscle memory. Simply put, the mouse and the cursor should always move the same way. However, personal preferences vary.

To turn mouse acceleration off on Windows, clear the "Enhance Pointer Precision" box. This disables mouse acceleration. However, some older games call for the OS to temporarily re-enable the acceleration feature while in-game. A workaround is to simply modify the acceleration curve in Windows Registry such that it corresponds to 1-to-1 movement. This can be done with open-source utilities like Pointer Speed Setter, which also lets you set finer increments of Windows sensitivity not accessible from Control Panel, if you so prefer.

This change may or may not be permitted in sanctioned play. However, under no circumstances can be it be called a "hack" or "cheat;" it is perfectly legal, merely inaccessible from the Windows GUI.

On MacOS, disabling acceleration is not exposed to the user by default. SteelSeries Exactmouse is an applet that disables acceleration from the OS level. When running it for the first time, you will need to manually unblock it from the Security preferences menu so that it can be started automatically in the future.

Other programs such as SmoothMouse or this program will allow you to disable mouse acceleration as well, but their compatibility is often broken by newer MacOS releases. 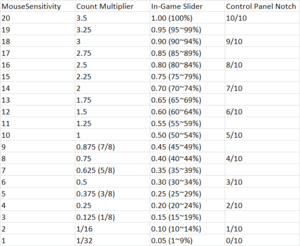 Assuming you play StarCraft 2 at the same resolution as your desktop, as of patch 1.4, you can set StarCraft to use the same mouse settings as your normal Windows (this is often easier).[Citation needed] To do this, go to Options > Controls and un-check "Enable Mouse Sensitivity". This will make StarCraft use the operating system's pointer speed setting.

If SC2 is not set to disable mouse sensitivity, it will instead apply one of the 20 Windows sensitivity settings according to 5% intervals on the percentage slider. The pointer counts received from the mouse is multiplied by the factor according to the table on the right.