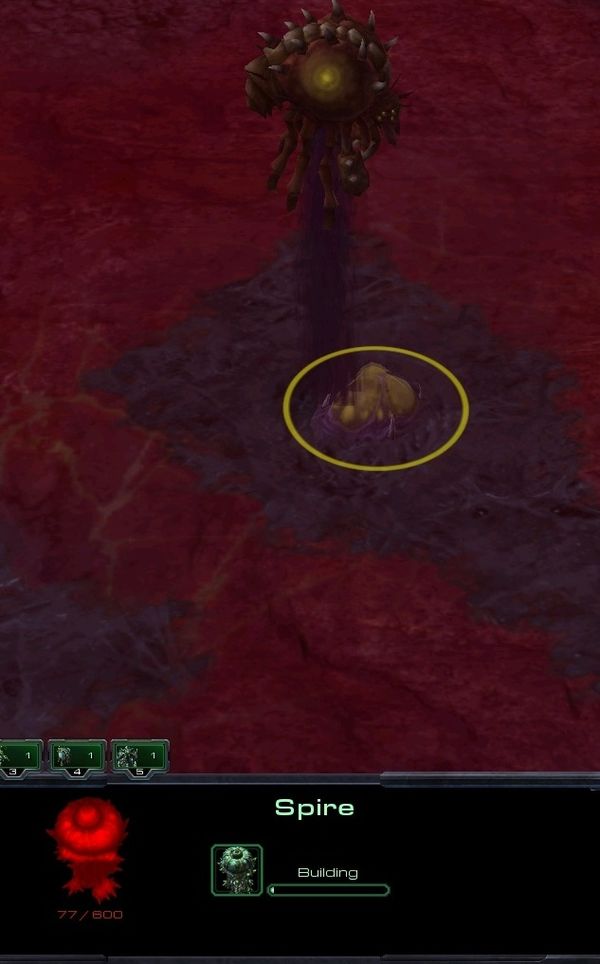 This build centers around getting very fast Mutalisks and expanding only after the Spire has been put down.

Fast Mutalisks allow you to potentially do significant damage to the Terran's economy, especially if the Spire does not get scouted and no air defense is set up in time. Mutalisks also grant easy map control and usually let you take a 3rd base without much trouble while denying your opponent more than 2 bases. If you fail to do any damage to the Terran's economy you should still have map control and use that to catch up or get ahead in terms of economy.

The first real scouting of your opponent's base will be done by your Mutas. Watch out for Thors (it is possible to have them at this point) as well as Missile Turrets and deal damage where you can.

When you move out with your Mutalisk you may want to throw down 1 or 2 Spine Crawlers to deal with a counter push. Use an Overlord to drop creep near your expansion to raise them there as the expansion will not be up yet. As you harass make sure to constantly build more Mutalisk in your bases.

Take your 3rd base when you have around 50 Drones (usually around 100 total population).

With this build it is fairly easy to hold off most early rushes or timing attacks the Terrans can do due to the extremely fast Metabolic Boost. Make sure you see the Terran move out and start producing more Zerglings and Spine Crawlers as you see fit.

The Terran will most likely react with Thors and maybe Vikings (as well as Missile Turrets). This means you want to eventually Transition into Roaches. Build a Roach Warren reasonably early and start getting some upgrades for them. Mostly Speed and if you see tanks also get Burrow. If the game goes on longer, mix in some Infestors and eventually Ultralisks or Broodlords. Should the Terran decide to go mass Marines to counter your Mutalisk, build a Baneling Nest.

While Thors are not a Hard Counter to Mutalisk they do fairly well in defending from Mutalisk harass. Once the Terran gets around 2-3 Thors out, this can shut down your harass. But do note that Mutalisks can kill small numbers of Thors without backup relatively easy if you spread them out just a bit. This strategy is known as the "magic box". Also try to make use of the fact that Thors are very immobile. Vikings can also be used to counter the Mutalisks, but note that they are significantly slower than Mutalisk (2.75 vs 3.75). Especially in larger numbers or backed up by Thors their enormous attack range can be dangerous.

Marines in large numbers can also fight off Mutalisks quite well. But it can be an advantage for the Mutalisks as well as the Terran should be careful of the Mutalisks' bouncing glaive attacks especially if the Marines are close to each other (in a ball formation for example), as Mutalisks can tear through the Marines like no other. However, you should avoid a direct Mutalisk vs Marine fight unless your Mutalisk count is much higher than your opponents Marine count.