Mutalisk (Heart of the Swarm) 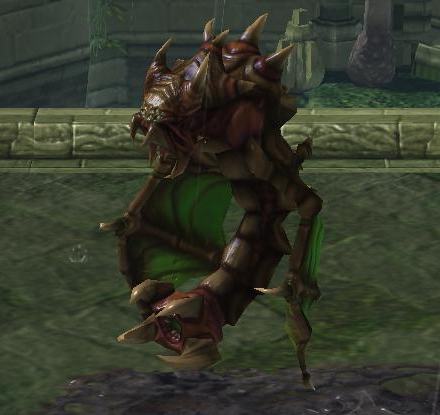 0 (+1)
Attributes:
Biological, Light
Sight:
11
Speed:
4
Strong against:
Weak against:
Note: All time-related values are expressed assuming Normal speed, as they were before LotV. See Game Speed.

The Mutalisk is an extremely fast air attack unit capable of attacking both air and ground units. The Mutalisk's projectile, known as a "Glaive Wurm", hits the target and then two subsequent targets (each for a third of the damage of the previous hit). Mutalisks make effective scouts and skirmishers, able to slow/disrupt mining operations, incoming forces, or enemy expansions.

Early-game Mutalisks are harassment units and should be used as such. They should only directly engage an army when they massively outnumber the opposing force or are supporting a large ground force. Their strength lies in their mobility, picking off stray units, workers, and buildings. Because few units are fast enough to keep up with Mutalisks, they provide indirect map control - if an enemy balls up their forces to take the offensive, Mutalisks can be used to pick off buildings and units within the enemy base, forcing the enemy back to defend.

Deciding how many Mutalisks to morph is crucial. As each Mutalisk is added to the group, the benefits gained decrease. The number of Mutalisks to make depends on the situation and must be learned through experience. When used for harassment, attack upgrades should have priority over armor upgrades, as your objective is to cause as much damage possible to defenseless targets and run away before much enemy fire comes your way.

A micromanagement trick to make all Mutalisks pop at the same time is to select all the Larva/eggs and bind them to a hotkey. This way, when the Mutalisks spawn they will remain assigned to the same hotkey and can be sent to the enemy base slightly faster.

Due to the Mutalisk's attack style, Mutalisks can most efficiently harass when "stacked" into a clump that generally appears, moves, and attacks as a single Mutalisk. This makes it very difficult for an opponent to target-fire the weakest Mutalisk in the group. Also, with proper micromanagement, every Mutalisk in the stack will attack at the same time, allowing the Mutalisks to dance in and out of the enemy's firing range, greatly reducing damage taken.

The proper micromanagement for Mutalisks involves moving into range to attack, retreating during cooldown to avoid retaliation, then moving back into range to attack again when the cooldown has ended. While doing so, Mutalisks should be manually assigned targets rather than attack-moving so that they will focus fire and kill the same unit rather than injure a number of units.

Due to their relatively slow acceleration, Mutalisks should be continually moved at full speed even when there is no harm in sight - this allows them to easily escape at full speed when defenders arrive.

Like all units without firing animations, Mutalisks can attack while remaining at full movement speed if issued the attack command followed instantly by the move command. It is important to note that if Mutalisks are not given a target, they often decelerate before firing, which will allow the targets to slowly get away, so manual targeting must be used rather than attack-moving.

The natural Protoss counter to the Mutalisk is the Phoenix, that does extra damage versus Light units and is more mobile than the Mutalisk. A Protoss that decides to tech to Phoenixes will generally shut down any Mutalisk play and will get map control. It is important to rule out Phoenix play before teching to Mutalisks.

Mutalisks are extremely effective against Terran players, since they have difficulty in dealing with a combination of Mutalisks/Banelings/Zerglings. The splash damage of the Thor allows the Terran player to more effectively counter this unit combination, but Mutalisks can still be used to abuse the relative immobility of Thors by doing hit and run attacks on portions of the Terran's base that are not covered by Missile Turrets. SCVs and Supply Depots should be the high priority targets. Missile Turrets are strong against Mutalisks and will hold off small numbers of Mutalisks should they engage Turreted positions.

When a Terran pushes out with a bio force accompanied by Siege Tanks, the Mutalisks will lose in a straight up fight with Marines. With good micro though, a group of Mutalisks will be able to snipe off the Siege Tanks one at a time while avoiding the Marines.

Muta Spread Technique vs Thors ("Magicboxing")
With proper micro it's possible to take on Thors with Mutalisks, this does however require a special micro technique called "magicboxing". The way this works is that whenever Mutas attack they clump up on each other. The way to prevent this is to fly right over the Thors using a move command and hit the Stop or Hold position button, in this way the Mutas will be spread out and take no splash damage while they start attacking the Thors. With this technique it is not possible to focus fire as that would clump them up, but usually only 1 or 2 Thors fit underneath a mutalisk pack. As illustrated in this video:

Mutalisks are much more dangerous in HoTS due to their buffs. While the buffs themselves do not affect the battle, it has had an effect on the number of Mutalisks made. Zerg players opt to go for a much larger number of Mutalisks than in Wings of Liberty, and if a Terran player is caught off-guard it can end the game. It is also tricky for the Zerg player due to the introduction of Widow Mines, which are a hard counter to Mutalisks.

Mutalisks are used in Zerg vs Zerg to gain map control. Although they are cost-effectively countered by Hydralisks and Corruptors, the extreme mobility of Mutalisks allows them to pin an opponent in their base defending drones until Infestor tech is reached. Additionally, Mutalisks can also be used to kill any Overlords or other scouting units and leave the opponent playing blind. Quickly teching to Mutalisks can also be used as a devastating surprise attack due to the lack of Tier 1 Zerg anti-air units, allowing Mutalisks to deal heavy damage.

Because the effectiveness of upgrades increases as the number of units increases, a player who upgrades their Mutalisks early should play defensively and accumulate Mutalisks rather than trading them against enemy units, and then make a timing attack as soon as the upgrade completes. Conversely, a player should attempt to engage an opponent suspected to be stalling for upgrades to finish. Additionally, this also means that upgrades should be started sooner on macro-oriented maps and positions, and vice versa.

Focus fire is always preferred in small Mutalisk vs. Mutalisk battles, as dead Mutalisks do not cause damage while several hurt Mutalisks do. Because it takes 14 attacks to kill an opposing Mutalisk, Mutalisks should be selected in groups of 14 or 7 so that they can efficiently one-shot or two-shot enemy Mutalisks without wasting attacks. These numbers should be adjusted accordingly if upgrades are in play. In larger (21+ Mutalisk) engagements, this is no longer relevant as the sizable amount of bounce damage negates attempts to focus fire efficiently.

Overlords can be used to soak up Mutalisk bounce damage as they take damage that otherwise would have been dealt to other units. This can be used to gain a small advantage, especially when engagements take place in or near a player's base. Overlords benefit from Air Carapace upgrades as well, allowing them to absorb even more damage.