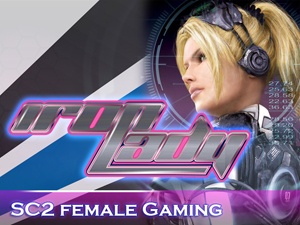 The Iron Lady is a series of tournaments for women only, run by National ESL on the North American server co-founded by the Head Admin pHaRSiDe and Team FemFX founder Yui. The aim of the organization is to give an opportunity for the top female gamers to break out into the scene and network with other female gamers they may not have even know existed and to every month have a series of tournaments for all skill levels that run for hundreds of dollars in various prizes.[1] Iron Lady did however go on an almost two-month hiatus between Champion Cup #4 and Champion Cup #5 and an even longer one after the Leetgion Tournament.

The Iron Lady Hall of Fame documents all the top 3 place finishers at each tournament. It keeps statistics on player rankings as well as race and country rankings. and is all organized by the amount of medals won.

January 19, it was announced that Iron Lady would be setting up showmatches of special interest.[5]

Iron Lady also has a series of interviews, called spotlights, with the winners of their tournaments. Since the participants in Iron Lady are not as well known outside the female scene, these spotlights double as a way to introduce the players to the community.

The European part of ESL tried running monthly female-only tournaments after the launch of StarCraft II, and the North American division (National ESL) tried running weekly tournaments, but interest was too low, and consequently the projects were put on hiatus at the end of 2010. The results can be found on this page.

Before the launch of the NESL Iron Lady, the National ESL had already organised a series of weekly female-only tournaments, the StarCraft II 1v1 Ladies Night Cup: