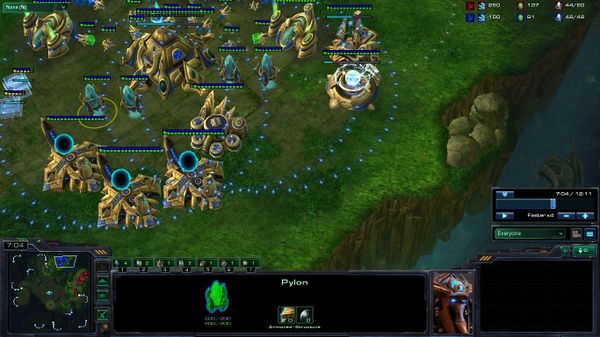 This build is intended to safely take a Protoss player into the mid-game in PvP. If executed correctly, it can defend against a 4 Warpgate Rush, Observers will be out quickly enough to defend against Dark Templar, and Blink Stalker All-Ins can be held with the aid of the ramp. Additionally, Blink Stalkers and Observers can be used to pressure the opponent's base (Observers will be used to provide high-ground vision, thus allowing Blink Stalkers to Blink in-and-out of the opponent's base).

When NaNiwa performs this build, he usually does not scout on 9 Pylon or on 13 Gateway. With the goal of gaining a slight economic advantage, he delays scouting until they build their Cybernetics Core. Occasionally, he even waits until your opponent's stalker is out before determining his opponent's starting point. While saving a Probe, this does have the downside of leaving the Protoss player susceptible to both a 4 Gate (if his opponent's Probe, Zealot and Stalker force come from a strange angle) and a Proxy 2 Gate Rush.

Assuming you have seen your opponent build a second Assimilator, use more than two Chrono Boosts on Probes and not stall Probe production (all of which suggest that the opponent is not 4 Gating), you can be aggressive with your Zealot and first two Stalkers. If your opponent did not build a Zealot before their first Stalker and is not doing a 3 Stalker Rush, then you may want to move up your opponent's ramp. Because you Chrono Boosted out your second Stalker, you can often catch your opponent with a single Stalker and a single Sentry. If you barge up then - at the worst - they'll Force Field out your two Stalkers and allow your Zealot to scout their base. However, if you manage to get two units up their ramp then you'll be able to temporarily overpower them, which might allow you to score some cheap Probe kills. Alternatively, you can simply park one of your units below your opponent's ramp and see what shoots down at it.

Generally, only a single Observer is initially built and it is rallied to your opponent's base escorted by a group of Blink Stalkers. The one exception to this is when your previous scouting has suggested to you that Dark Templar may be in play (the biggest tell is your opponent built a large amount of Zealots). In that case, you can either keep your first Observer at your main base for defence, or send your first Observer and Blink Stalkers to the opponent's base whilst blocking your main ramp with units and building a second Observer for defence.