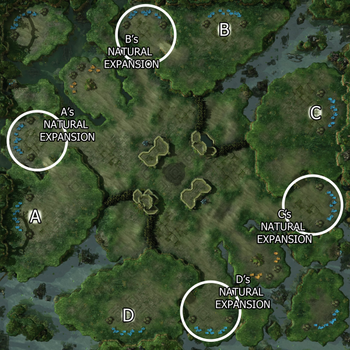 The Natural Expansion is the expansion closest to a player's starting position. While most commonly separated by a ramp and placed directly outside the starting base of a player with a choke protecting the entrance, maps have varied with the design of the Natural Expansion.

Many build orders, such as the Forge Fast Expand, Hatchery First or 1 Rax Fast Expand, are specifically tailored to taking the natural expansion early. This is a calculated risk, designed to get the economic boost of a second base quickly to transition into the mid game with an economy focused build.