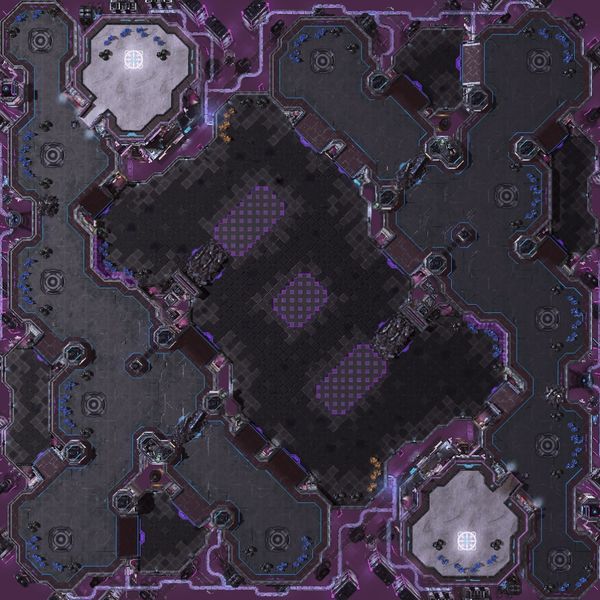 There are many 1 x 1 unpassable doodads that form different features of the map. 1 x 1 passages blocks the big units: Siege Tank, Thor, Archon, and Ultralisk while all other units can pass. 2 x 2 passages are accessible to all units.
Scattered chokes made up of 1 x 1 passages can still be used as typical chokes, but require more buildings to wall-in.
The main is smaller than that of typical macro maps to lessen the strength of air units.
There are three choices for the third. One is a pocket third that is safe from air harass but has fewer resource nodes. Its entrance is made up of 1 x 1 passages so big units cannot pass through.
The other two choices are the vertical third and lower ground third. The way to the vertical third is initially narrowed to adjust the natural’s entrance. The lower ground third can be harassed from above.
The vertical fourth is relatively vulnerable compare to the other choices. There are lower ground zones to harass and the entrance consists of 1 x 1 doodads. This entrance has 2 x 2 passage so big units can pass.
The middle is a massively wide zone but has scattered chokes of 1 x 1 doodads. Four lines of doodads have a few 1x1 passages and one 2x2 passage. As the widest passage is the outmost one, the big units take more time to travel to the opponent’s base.
There are also three clusters of 1 x 1 doodads in the middle. Players can avoid this zone by using roundabout ways.
Breaking the four 6 x 6 rocks also leads to new attack paths so you can bypass these features.

Neon Violet Square is a macro style map with areas in the middle that restrict pathing from larger sized units.