The Infestor temporarily takes control of target unit. This ability will be cancelled if the player manually cancels, if the controlling Infestor is killed, or if the unit being controlled is moved outside of the Neural Parasite's range. While this spell is activated, the casting Infestor cannot be ordered to move. The affected unit is not considered a threat to the opponent's army and will not be automatically targeted. Any weapon or armor upgrades will still will be retained by the affected unit, and it will adopt the controlling player's color while under the influence of Neural Parasite. 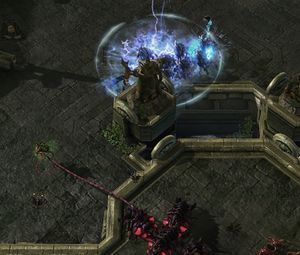 Typically it's better to save Infestor energy for Fungal Growth in this match-up. The spell is still useful in dealing with harassment. Enemy nukes may be used if ghosts are captured and nukes are available which is a fun and surprising thing to do. In addition, it's possible to Neural Parasite an enemy Ghost, and cast EMP on the enemy's other Ghosts or other spell casters[1], draining their energy. In the rare case that a Terran player masses Battlecruisers, a Zerg player can quickly change the tide of the game with a few Infestors.

Rarely used in ZvZ because the Zerg army focus on quantity rather than quality. At the same time, the unit that is the best target for this spell, the Ultralisk is immune to the effects due to its passive ability Frenzied. Neural Parasite can be effective to use on enemy infestors since it allows the user to use up the enemy's energy. Also, it can in rare cases turn a game from win to loss if it is used on an enemy Baneling in the middle of a Zergling army, as this will instantly kill all zerglings (Fungal Growth deals less damage than a baneling and has a radius of 2, while the baneling attack has a radius of 2,2).