Nexus (Legacy of the Void)

This article covers the current multiplayer version of this building. For another version see Nexus (Wings of Liberty and Heart of the Swarm). 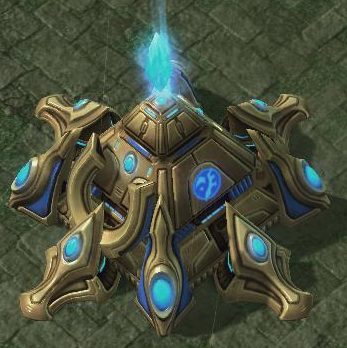 The Nexus (plural Nexi,[1] Nexuses,[2] nexūs) is the fundamental building for the Protoss. It warps in the Protoss worker, the Probe. Since patch 4.0.0, after the Fleet Beacon is built, the Nexus can also produce the Mothership. The Nexus is also capable of casting the Chrono Boost spell, which gives a bonus to production and research. All harvested minerals and Vespene Gas must be returned by Probes to the Nexus in order to become available for use. Along with the Assimilator and Pylon, the Nexus is one of only a few Protoss structures that does not require a Psionic Matrix. While Nexuses can theoretically be built anywhere on the map, they are almost always built as close as possible to mineral patches and Vespene Geysers.

At the beginning of the game, Protoss players start with an initial Nexus, providing 15 supply points, and twelve initial Probes. From that first Nexus, the player can immediately warp in additional Probes.