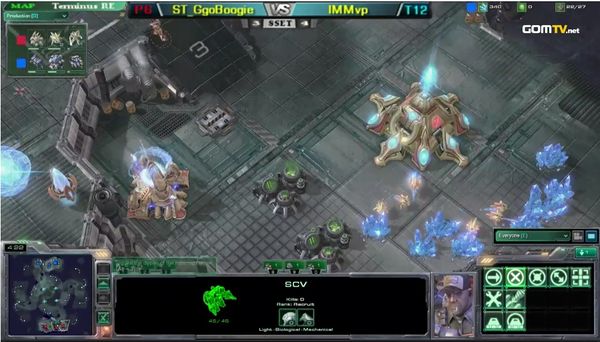 Best used on larger maps where early scouting is unlikely. On maps where close-positions are a possibility, early scouting should be used to check whether or not the opponent is in close-positions before choosing to follow this build. This build is an economic counter to any gasless fast-expand builds that a Terran player can use, equalled only in economy by Command Center first openings.

This opening is incredibly reactive after the Nexus has been placed down, which means that you have to be confident in your ability to read what the Terran player is doing with limited scouting information. For this reason, this build is not suitable for lower-level players.

As already mentioned, this build is incredibly reactive. Beyond the point where you have placed down a Nexus, a Gateway and an Assimilator, there are a whole range of transitions that need to be made dependant on what the Terran is doing. These transitions will be discussed in the Scouting section of this article.

For now, here is the basic opening you will use whenever you do this build:

You will be doing a range of different builds dependent on what you scout the opponent doing:

First and foremost, if you get to your opponents base during the time when there is only 1 Marine at the ramp (or before the first Marine is finished), it is always worth it to sacrifice the Probe in order to see what buildings they have placed down and whether or not they have taken a Refinery. If you scout after your first Pylon then you have a better chance of seeing their gas timing, and seeing their gas timing can be crucial to your subsequent response.

Scenario 1: 1-2 Marines In The Natural With a Bunker Building[edit]

Keep in mind that it is always possible for the Terran to be doing an elaborate fake by building a Bunker at their natural expansion and hoping that you assume that they are going for a gasless expansion. Always be diligent about checking their Marine count and always look for potential opportunities to sneak in your Probe and confirm that an expansion is being built. The worst-case scenario is that they are faking a fast-expansion and instead going for a 1/1/1 all-in because you may not have detection in time to defend against Cloaked Banshees; if they do not have an expansion present by 6:00, get detection as soon as possible.

Scenario 2: No/One Marine with a Tech Lab Building on a Barracks[edit]

This can be one of a number of different things, all of which have similar responses. It can be a Tech Lab first 2 Rax Reactor/Tech Lab push (which is uncommon), some kind of Marauder-only 2 Rax opening (also unlikely), a 3 Rax Stim all-in (somewhat likely as a response to the Nexus First opening) or a 1 Rax Tech Lab expand (most likely). Most of the time it will be a 1 Rax Tech-Lab expand with an early Reaper. It is extremely important to diligently check for Bunkers building near your natural when a Tech Lab is scouted. If a Reaper can get in range of the Nexus or workers with Bunker supporting then it can almost instantly lose you the game - it will certainly cancel out any advantage gained from your early Nexus!

On his stream, Axslav makes it very clear that vs. Tech Lab openings he stays on 1 Gate a little longer and Chronoboosts units out of that single Gateway. He does so in the following sequence: Zealot, Zealot, Stalker, Stalker and then gets his second Gateway ~5:30. He also says that vs. a Reaper first build that the first Zealot out of the Gateway is pretty useless defensively and so opts to send this Zealot out onto the map to scout whether or not the Terran player has chosen to expand.

If you scout a Tech Lab first variant of a 2 Rax Reactor/Tech Lab push coming your way or scout them staying on one base then Chronoboost units out of your 2 Gateways and get ready to pull Probes if they have pulled SCVs. Understand that even if you lose Probes, your earlier second base will leave you ahead economically as long as you manage to keep your Nexus alive. If you scout them expanding then Chronoboost nothing but Probes from the point that you scout the expansion until ~7:00.

Scenario 3: One Marine with a Reactor Building on a Barracks[edit]

At this point, just assume it's a standard 2 Rax Reactor/Tech Lab push. There are of course other possibilities, but none of them are dangerous to a Nexus first economy. The other possibility is that it's a 1/1/1 all-in, but the 2 Rax response does not prevent you from holding this all-in as your economy will be plenty good enough to hold a 1/1/1 all-in.

On his stream, Axslav makes it clear that it is very important to chrono your first Zealot out before your Cybernetics Core. The build will be: Gateway, Assimilator, Gateway, Zealot, Cybernetics Core. You should Chronoboost out 2 Zealots from the first Gateway, with the Cybernetics Core and the second Gateway finishing as the second Zealot comes out. At this point, you should Chronoboost out 2 Stalkers. Continuously build Stalkers and squeeze in Probes when you can afford them. If they pull SCVs with their push then you should match their SCV count with Probes. Ensure that you target fire Marauders first because if you eliminate the Marauders then it becomes a case of Marines vs. Stalkers and this is a fight that is easy to win with proper micro.

If no push has arrived after the first two Stalkers have been out for about 10 seconds then send a Probe along the path that the Terran push is most likely to take. This will result in two scenarios:

Scenario 4: Nothing in Natural, Unable to See Terran Production[edit]

This is the hardest scenario as it makes it very unlikely that you're going to be able to scout the add-on that the Terran player throws down. On his stream, Axslav has stated that getting perfect scouting information vs. Terran at this stage is very hard. However, he has a system that he uses to get as good of a read as you possibly can.

After you have managed to fend off any early-game pressure or managed to see that they are going for a fast-expansion of their own, transition into your favourite Protoss mid-game strategy. Two of the most common transitions are shown below:

On his stream, Axslav will usually transition into a Robotics Facility for fast Colossi whilst also getting two Forges for fast upgrades. As long as you can survive any push by the Terran you should win in the late-game since you've had an economic lead from the start of the game, and you should have an upgrade lead from going double Forge. This is why this transition is the most reliable; as long as you don't die to drop harass you should find a perfect timing where you've got a stronger army.

A more in-depth guide to the double Forge transition can be found in the Double Forge (vs. Terran) article.

Another possibility is to use your faster economy to hit an incredibly early 6, 7 or 8 Gate timing-attack. The idea here is to quickly build a large number of Gateways and use the quick influx of units to crush the Terran player's expansion before they have enough units to defend. The number of Gateways built will depend on the timing you want to hit and how many Probes you plan to build. For example, ~30 Probes can effectively support 6 Gateways worth of production, whereas more are required for larger numbers of Gateways. Do note that you do not want to delay with the attack too much, since when the Terran players finishes their Stimpack research your attack will lose a lot of strength.

What you will essentially be doing is this:

If you plan on going for this type of all-in then Zealot/Sentry production is ideal as Guardian Shield and Forcefields will allow Zealots to trade incredibly cost-effectively with Marines and Marauders. Stalkers are less desirable as they are not able to trade cost-effectively against Marauders, although they may be useful if the Terran has a low Marauder count.

Whilst attacking, don't forget to Forcefield behind Bunkers so that workers cannot repair and the units inside cannot escape. After the Bunkers are down, you should be able to at least force a lift off to the main, if not a surrender. Busting the Terran's main ramp can be incredibly cost inefficient so only try to do so if you're sure that you have an overwhelming force; containing the Terran on one-base is an acceptable outcome that allows you to transition into the mid-game.

Maps with a long rush-distance are great for this build, since it gives you more time to prepare versus the rush the opponent might preform. Another positive feature is if a map has more than one spawning location, that way a proxy will either be very far from your main, or it will be later because of having to scout you first. Having one of these two features is good, having both is great.

Small maps make this build very risky as the Terran player can abuse the short rush-distance to put on heavy early-game pressure.