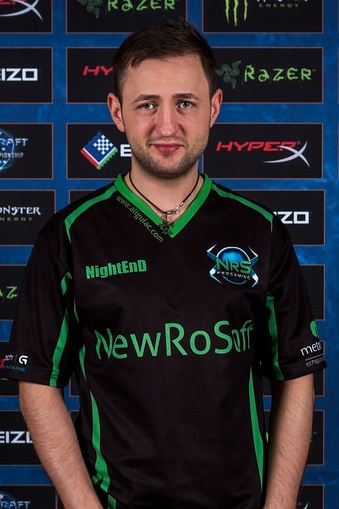 NightEnD played Undead in Warcraft III professionally and was his introduction to esports.[1]

NightEnD is a relatively successful player in weekly tournaments, with wins in the Go4SC2 ESL events in 2010 and various other tournaments. However, he didn't make a name for himself on the international scene until he beat MorroW in the TeamSpeak TL Open 14 Finals to claim a spot in the 2011 Pokerstrategy.com TSL3. He defeated the Zerg player with strong timing attacks and smart placement to join his teammate ThorZaIN in the $34,500 tournament. He would be eliminated in the first round against BoxeR following some map controversy.


On May 8, 2011, NightEnD left Praetoriani and joined Fnatic,[2] combined with fellow Praetoriani player ThorZaIN leaving for mousesports, Praetoriani disbanded.[3] NightEnD travelled to Korea in April 2012, to practice in the new Fnatic Team house, and play in the GSTL.

From June 23 to June 24, 2012, NightEnD participated in the World Championship Series 2012 Combined Europe. NightEnD went on to defeat ScReaM and Giantt before he fell to the losers bracket because of biGs. NightEnD then took down monchi, defeated Giantt again, and then grabbed his revenge against biGs to advance into the finals to face LoWeLy. NightEnD took 2nd place because he could not take down LoWeLy as he lost by a score of 0-2.

On June 4, 2012, for the 2012 GSTL Season 2 Round 1, Fnatic sent out NightEnD as their starting player against Team SCV Life. However, he wasn't able to take out TSL's Shine and allowed TSL to take the lead at 1-0.