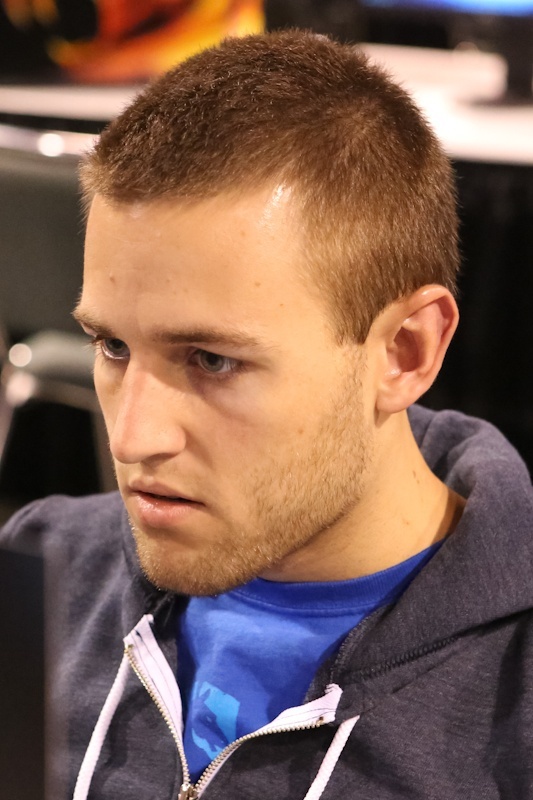 NonY has a solid playstyle with very strong mechanics and decision making. Meticulously timed out build orders as well as Phoenix play (particularly against Terran) are characteristic of his play. Use of Blink Stalkers in timing attacks against Zerg has also become a NonY favorite.

NonY is a professional StarCraft II player (and former Brood War player) from the United States. He played as Protoss in Brood War and continues to play as Protoss in SC2. During his Brood War years, NonY was part of several premier foreigner clans, including Liquid', xLo, and [Media]. For a short time in 2008, NonY lived in Korea and played for the South Korean professional team eSTRO. The following year, he achieved widespread recognition for winning the biggest foreigner Brood War tournament ever, the 2009 Pokerstrategy.com TSL, upsetting IdrA in a much-hyped Ro8 series and overcoming a 0-2 deficit to beat Mondragon 4-2 in the finals.

In his first vlog,[1] NonY described how he was having problems with depression and that he was finding it hard to get motivated. He said that at the time of TSL2 he had been performing well in university and was healthy, but after he had won the tournament he inexplicably fell into depression, which was greatly responsible for his lack of practice and his subsequent lack of notable results, especially in 2011. In his second,[2] he mentioned being on more effective medication, he also said he had been more motivated and had been practicing more and more regularly, which was reflected in his enthusiastic streaming on all three servers which often accrued several thousands of viewers.

NonY received a first-wave beta invite and started playing Protoss immediately. He also immediately began to stream his matches, even playing during his TSL2 practice hours.

NonY earned a reputation in beta for his Phoenix play. He was one of the first players to display effective Phoenix-centered builds.

After beta, Tyler officially changed his ID from "NonY" to "Tyler".

Tyler competed in the first TeamLiquid: Attack! for StarCraft II and each of the MLG events in 2010. Tyler defeated Greg "IdrA" Fields 4-1 in a showmatch for GosuCoaching using aggressive timing attacks at a point in time when IdrA was not losing many matches to foreign players.

Along with the entire Team Liquid roster, Tyler participated at MLG Dallas where he would take 4th place, the second highest finish for a Team Liquid member. That same month Tyler traveled to Sweden to participate in the DreamHack SteelSeries LAN-tournament with team members HuK and TLO. He made it to the quarterfinals where he would be defeated by Fenix, making it further than the other Team Liquid players.

Tyler was not able to retain the same success he experienced towards the end of 2010 in 2011, often ending up outside of the top 10's of several LANs and tournaments such as SteelSeries StarCraft II Challenge and MLG Dallas 2011 and the HD World Tournament, and also falling in the Ro16 of the 2011 Pokerstrategy.com TSL3 against the eventual winner ThorZaIN. He did, however, compete in all of the MLG Pro Circuits that took place in 2011.

Tyler was an invite to Columbus in Pool C against players like IdrA, MC, teammate Ret, ThorZaIN and SeleCT. He went 1-4 in his group, and proceeded into the Championship Bracket. He defeated Zerg player ViBE 2-1 but lost to MajOr 2-0, ending his run.

In Anaheim he dropped out of the Championship Pool and was forced into the Open Bracket. There, he managed to fight his way back into the pool play stage, but went 0 - 2 in all of his matches, placing last in his group. In the Championship Bracket he beat ThisIsJimmy, but then lost to CrunCher in the following round.

On August 23, 2011, Tyler released a vlog. He announced a streaming marathon in which he would drink 26.2 alcoholic drinks, eat 26.2 Krispy Kreme donuts, run 26.2 miles by treadmill, achieve 26.2 ladder victories (achieving one fifth of a win meaning gaining an advantage early on and then leaving) and doing 26.2 x 10 pull-ups.[3]. This marathon is to take place after sufficient preparation. In an interview with HotBid at MLG Orlando 2011, Tyler stated that he would possibly be modifying the challenge's alcohol portion (due to it being rather extreme), or simply not doing it at all.[4] He addressed the alcohol conundrums (as well as his running due to an injured foot at MLG Orlando) in his second vlog.

At MLG Raleigh 2011, Tyler fought through the Open Bracket, defeating iNkA but being held off by teammate HerO[5]. Tyler made it into the Championship Bracket, overcoming a 1-0 deficit to defeat Ostojiy but falling to HayprO 2-0[6], which ended his run. He finished 28th in the tournament.[7]

At the MLG Global Invitational 2011 (North America), Tyler managed to defeat SLush 2-1 in a close series, knocking the Canadian Zerg into the loser's bracket. Tyler advanced to play against MajOr but lost 0-2, sending him to the losers bracket. There he would face Destiny but was swept 2-0, knocking him out of the tournament.[8]

In NASL Season 2, Tyler was placed into Division 5 with qxc, DIMAGA, PuMa, TT1, HasuObs, teammate TLO, and MoMaN. He would yet again make a modest showing in the NASL with a final score of 2-5, losing to DIMAGA, PuMa and HasuObs 0-2, qxc 1-2 but defeating TLO and MoMaN 2-0. His final score would mean that he would not be eligible to participate in the playoff bracket or the grand finals, but did ensure his return in the next season. His results however, were quite an improvement compared to his run in the first season.[9]

Tyler played in MLG Orlando where he was seeded into Group D. There, he would lose all of his matches and end up last in his group. He would beat KawaiiRice in the first round of the Championship Bracket, but then be defeated by Machine in the following round. Tyler would take another modest 21st place finish.[10]

Prior to MLG Providence, Tyler began a notable increase in streaming his ladder games on all three servers. His resurgence in activity and practice was received with great anticipation by the community and as a result many theorized that Providence would be his break-out tournament after almost a year of relatively meager results. At Providence, Tyler fought through the open bracket, winning his first game against KawaiiPanda (unrelated to KawaiiRice) 2-0. He would go on to the second round, defeating Forbs 2-0 but fell to the South Korean player KeeN 0-2, which dropped him into the losers' bracket. There, Tyler would overcome duckyr 2-0 before finally being eliminated by binski in the fifth round, losing 0-2. Despite his unfortunate elimination, Tyler would later find some comfort in the arms of Destiny.

Tyler also received a personal sponsorship from Stride Gum for 2011.

Starting 2012, NonY moved from Texas to California as his wife started her paediatrics residency. In an on site interview with Team Liquid at MLG Anaheim 2012 he revealed that because of the recent move and his lack of time to practice, he had removed himself from the MLG Spring Championship 2012 in order to focus on the Blizzard US Qualifier being ran simultaneously. He Qualified for the North American Finals by taking 12-16th at the Qualifier.

He played in the tournament, Trial of the Xel Naga hosted by Day9 and Red Bull. He managed to win the finals vs iNcontroL. [11]

After staying relatively inactive for some time NonY entered the WCS AM Season 1 Premier League Qualifiers. He reached round 5 in the winners bracket, but there he lost to hendralisk, dropping down to have HTOMario in the losers bracket. After beating him 2-1 he lost to Cham 0-2 and was knocked out of the tournament.

On May 4, 2013, NonY entered the Season 1 Challenger League Qualifiers. After beating kappn 2-0 in the first round, he lost 2-1 to Jaedong and then CatZ to be knocked out of the tournament.

NonY was knocked out of the first American Qualifier by CatZ in the Ro16, but he managed to qualify for 2014 Season 2 WCS NA Challenger League via the second American Qualifier, defeating notable players such as ViBE along the way.

On June 28, 2013 NonY entered the Open Bracket for the 2013 MLG Spring Championship. Placed in the 2nd bracket in the Winners Bracket he scored early victories against MaximusBlack and HwangSin, but a 2-1 loss to SaSe sent him to the Losers Bracket. There he lost 2-1 to Bubbles and fell out of the tournament.