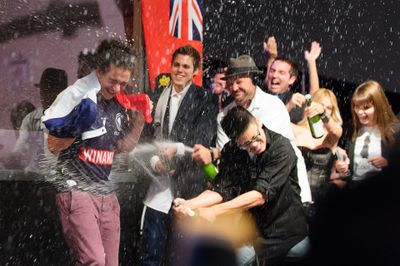 For Season 3, NASL underwent a number of branding and employee changes. The organization updated the look of their logo, and hired the casting duo of MrBitter and RotterdaM as well as a third caster, Frodan.[1] A number of changes were made to their regular season play as well: effort is made to play and cast games live, and the winner of each match throughout the regular season is awarded $150.[2]

The Season 3 finals was held at the International Centre in Toronto, Canada,[3][4] together with the 2012 WCS Canadian Nationals and the Collegiate Starleague Season 5 Canadian Championship. The event was cast by Gretorp & Frodan, RotterdaM & MrBitter, iNcontroL & IdrA, Day9 & Soe, and hosted by Clutch & Lauren Elise, with Kadium & Elemental casting in French.

The third season is composed of several stages:

A total prize pool of $100,000 is distributed throughout the season, with $150 awarded for each match won during the Divisions, and an undisclosed amount awarded to the winners of the Wildcards.[5]