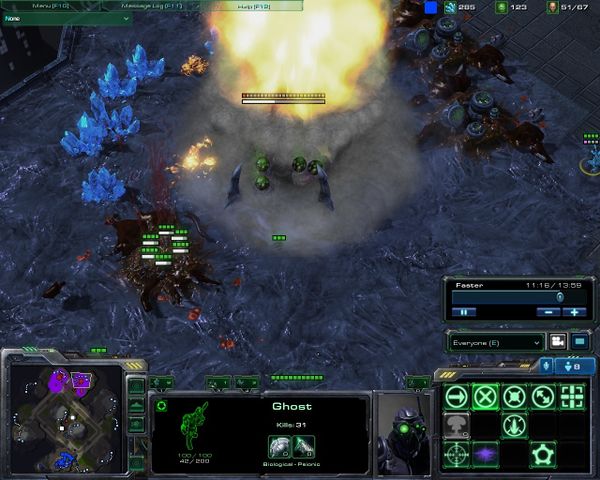 This build emphasizes the element of surprise and disruption of Zerg's economy line. Success of this strategy heavily depends on the use of the Hellion to buy time for the surprise attack consisting of the Ghost.

There are 3 goals a Terran player can achieve with this strategy:

Depending on the scouting information that SCVs, Scanner Sweeps, and Hellions can obtain, some variation openings are possible to counter a Zerg's strategy. 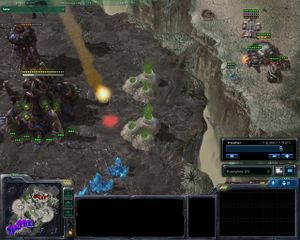 Make sure to adjust the build order to suit the terrain you are playing on. Maps like Lost Temple and Desert Oasis favor use of Marines and turrets over Marauders. Use cliffs near the mineral lines to nuke safely, while building static defenses such as turrets and Bunkers to fortify your position.

Many maps also have hidden positions with line-of-sight blockers, such as Metalopolis and Blistering Sands. Try to hide your Ghost there after the nuke to continuously nuke the base afterward.

In order to successfully execute subsequent Ghost usage, Hellion harass is necessary to distract Zerg's attention and put him in defensive mode. Hellion harass enforces the following actions from Zerg; 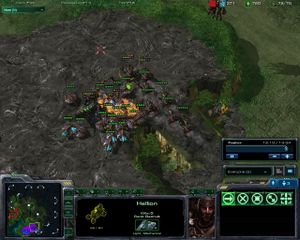 During Nuclear Launch, use Hellions to distract and eat away any fleeing Drones!

All of these actions slow down Zerg's production capability which gives out the opening for Ghost usage.

Thought process of Zerg players upon seeing Hellions are usually as followed;

As long as Ghost Academy and a Ghost is hidden from Zerg's point of view, Overseer is usually delayed until they see Ghost or Banshee, which leaves an opening for a cloaked Ghost to nuke the base freely. Use Hellions to distract and eat away any fleeing drones while nuking the base. Continue producing Nukes afterward and nuke Zerg's 3rd expansion or other exploitable areas. 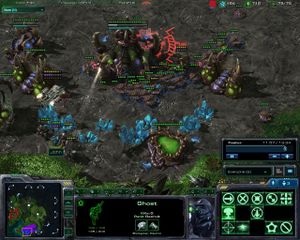 Due to continuous Hellion harass, Zerg is unprepared for sudden nuke rush.

Once you have a sizable army consisting of a Ghost, push to the Zerg's base. Use a nuke to destroy the static defenses at the front. Most of time with 1 Medivac healing Ghosts and other armies protecting it, it is extremely difficult to take down a cloaked Ghost nuking down Zerg's front base. Even if your rush has failed, you can still pump Ghosts until Zerg gets Tier 3 units and deal with most of Zerg units while you yourself either go expand or complete your MMM balls.

NOTE: As of patch 1.4.3, the damage of Snipe is reduced to 25 (+25 vs Psionic), severely decreasing its usefulness overall (especially against Zerg) and making the below section outdated and, for all-intents and purposes, null and void.

Snipe can deal 45 direct damage to any Zerg units at a range of 10. Snipe can;

Baneling, Mutalisk, and Hydralisk are prioritized for sniping as they have higher DPS than others.

Simply select all your Ghosts and press "R" and left click Zerg units repeatedly to execute Snipe. You can shift-click Snipe ability to instantly take out all of Zerg's units as well. Whenever you see Infestors, just cloak your Ghosts and either Snipe or EMP them. Dealing instantaneous damage of 45 at range of 10 effectively halves down Zerg's army even before the fighting starts. Spam as much as possible to cripple their forces, and attack-move to clear all Zerglings.

Depending on the damage you have dealt to Zerg, you can either;

If you choose to rush the game, you should have about 2 Ghosts, 5 to 10 Marines/Marauders, 2 to 4 Hellions, 1 Viking, and 1 Medivac. Analyze first to see whether the damage from the nuke was enough to win the game with this unit composition. Use scan to clear out Creep Tumors, and nuke the front of Zerg's base to clear out remaining Spine Crawlers, Snipe any key units such as Mutalisk, and end the game as soon as possible.

If you choose to expand, depending on Zerg's Tech buildings, Terran needs to change unit composition after the expansion. Due to having Barracks, Factory, and Starport, transition to any unit composition is possible for late game. Generally, following units are used to counter following T1 and T2 Zerg units;

Use the Ghost extensively to Snipe Zerg units and nuke any unguarded areas.

This build can also work out well against Protoss. Keep in mind a more experienced Protoss player will usually churn out at least one Observer when Robotics Bay is finished, however this is not always the case and Scanner Sweeps can confirm whether or not an observer has been produced. If not, the nuke must go down on the Pylon covering the Robotics Bay, after that proceed to neutralize all the Probes and try to prevent another Pylon to be built to restore the Robotics Bay. If executed the loss of Probes will usually result in a severely weakened economy and a GG.

Simcity: By using Zerg buildings like Evolution Chambers and Roach Warren, Zerg can effectively block off Hellion harass. However, Hellion drops work against this strategy. 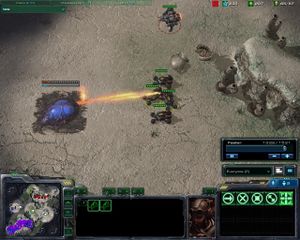 Secret Expansion: The purpose of this build is to halve Zerg's economy, so any secret 3rd expansion negates this Ghost Build. Constant scout by Hellions can effectively end this strategy as well. Be very active with your Hellions! 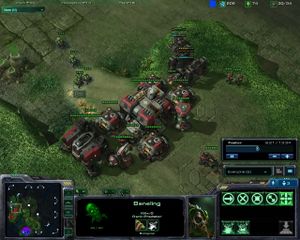 You kinda feel sorry for Banelings with walls like this.

Fast Baneling: If Zerg can get Banelings before first 2 Hellions pop out, they can swarm through the wall and win very easily. This is why early SCV scout needs to see if Zerg is getting gas or expansion. Extra wall-in can deter this attack very well. 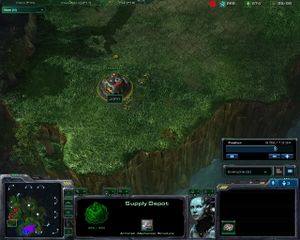 Build supply depots at places like here, to find any Nydus Worm activity.

Nydus Worm: Similar to Baneling, you need to scout properly and see whether Zerg is going Baneling or Nydus, since two builds require completely different placement of Supply Depots. Spread your Supply Depots around your base to reveal fog of war.

1-Hatchery Fast Muta: This build can make 5 or 6 Mutalisks extremely fast, leaving Terran no time to react at all. If your early scouting SCV does not see any expansion and even find early Lair-teching, get Engineering Bay as soon as possible and delay Ghost Build a bit, and place turrets on your mineral lines and production lines. Once you get 2 or 3 Ghosts, 5 or 6 Mutalisks will not be a problem with proper sniping. Do not forget to tighten your choke as well, as a lot of Zerglings will come with the Mutalisks.

Speed Overlord Scouting/Overlord Sacrifice: The success of this build depends on secrecy of Ghost Tech. Therefore it is crucial to hide the Ghost Academy as much as possible. Spread your Marines to see any incoming Overlord and take it out as soon as possible. Proxy-building your Ghost Academy may be a possible solution to this. Worst case scenario would be canceling nuke production and move to regular build with 1 or 2 Ghost as a support.

It is preferable to secure safe choke at your base for secrecy of this build. Having more than one entries or terrain advantages like cliff are also preferred. Maps like Desert Oasis, Steppes of War, Lost Temple, and Metalopolis are recommended.

Any maps with backdoors or large ramp are not recommended for this strategy, as wall-in is crucial for the success of this build. Therefore maps like Blistering Sands, Incineration Zone, Scrap Station, and Kulas Ravine are not suitable.