Nydus Worm (Legacy of the Void)

This article covers the current multiplayer version of this structure. For another version see Nydus Worm (Wings of Liberty and Heart of the Swarm). 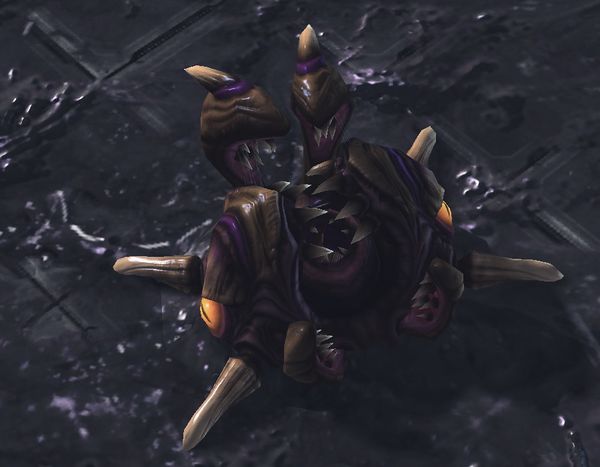 Unit Information
Type:
Armored Ground Structure
Description:
Friendly ground units can use a Nydus Worm to instantly travel to any other Nydus Worm or Nydus Network owned by the player. Grows creep used to feed nearby Zerg structures.
Cost:

The Nydus Worm is a Zerg structure used to move units quickly around the map.

After the Nydus Network is created, you can build a Nydus Worm anywhere where you have vision without the need for Creep or a Drone. The Worm takes 14 seconds to be set up, before emerging from the ground and settling into position. During this set up phase it has 3 armor. Once in position, it acts as an exit to the Nydus Network, allowing the player to transfer units from the Network to the Worm exit almost instantly. Upon completion of the Nydus Worm, a global sound effect will be heard from all players. Once the Worm is completed, it cannot be relocated and will act as an immobile structure.

The Nydus Worm can be useful if the enemy Protoss decides to Photon Cannon Rush you (more specifically, if the Protoss fully contains you with Photon Cannons). You can move one Overlord into a corner of the enemy base and Nydus in with Queens, Roaches and Zerglings (Queens first to keep the Nydus Worm alive with Transfusion and Roaches due to the amount of time it would take to unload a Nydus Worm full of Zerglings, which risk being killed one by one). In most instances, the Protoss player will not have sufficient defence in their own base since they just wasted many minerals on Photon Cannons and Pylons to contain the Zerg (and in many cases, the Protoss player may think they're safe after containing you and may prioritise tech over production).

This completely bypasses the need to waste units killing the Cannons or Pylons outside your base and is something of an "all in" in that you intend to use your entire force to destroy the Protoss, as Zerg players simply cannot accept a number of hatcheries equal to or less than their non-Zerg enemy. In instances where you cripple their economy but are forced to retreat and don't earn a victory, it may then be advisable to break through the Cannons to expand.

A Nydus Worm network is greatly beneficial against slow and immobile mech armies. Use the Nydus Worm to harass your enemy and to force their army to retreat to stop it. Tactics include sending Banelings into the enemy's mineral line and sniping critical buildings (e.g. Armory) with Speedlings. While sending armies through, you might also send one or more Infestors, burrow and hide it, then wait until the Terran has supposedly cleaned up everything, just to snipe another building or mineral line with Infested Terrans.

A Nydus Worm can also be used to sandwich a stationary mech or bio ball army from two sides. Burrow a Zergling at critical locations to have the vision for popping the sandwich Nydus exit.

If your main army is stationed far away from your base, you may also use the Nydus for retreats to your base or for reinforcements.

The Nydus Network has uses with Roaches on long distance map vs some Muta builds. A well used Nydus at the right time can win you the game. But often this becomes an all-in. If it does not succeed, it puts you behind and may lose you the game. You need to prepare for the worm as well, with well placed Overlords.

In WoL and HotS the Nydus Worm had no special protection during its set up phase, leading to players often being able to kill it before emerging using only workers or very few units. To counteract this in LotV the Nydus Worm at first was completely invincible during set up.[1][2] This was relaxed to a significant armor buff in Patch 4.7.1.