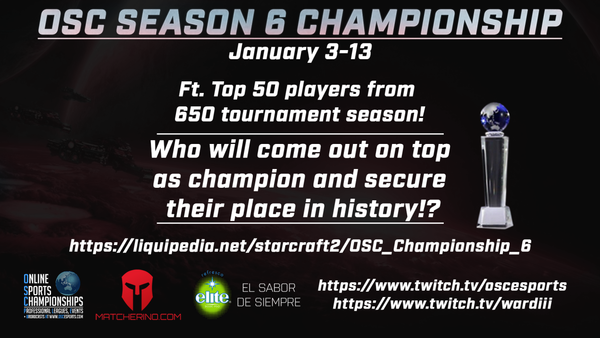 The Online Sports Championships (OSC) is an online global league for StarCraft II and other games.

The league follows a yearly season format, where players earn points for placing highly in all partnered tournaments, along with points acquired through bonuses and challenge matches. These points and player data act to form the OSC World Rankings and seeding system.

At the end of the yearly season, the top 50 players ranked via the OSC World Rankings are invited to play in the revered OSC Finals, where we determine our the yearly champion! Every player who plays in the finals gets be paid! We have designed a finals format which rewards the players who finish highly in the World Rankings, as they have shown a combination of results and regular participation throughout the year, and deserve rewards for their efforts. Thus seeding and competition for position within the rankings is highly important!