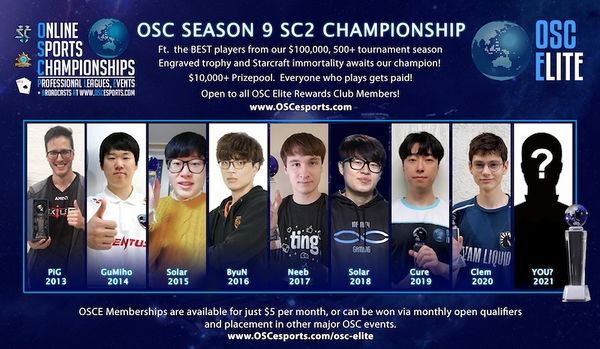 The OSC (Online Sports Championships) StarCraft II League is an online global league comprising 500+ tournaments run over 2021 (Season 9). The OSC World Rankings represent the data and results from all those tournaments (along with other bonuses and competitions), and are updated regularly throughout the year for players, teams and fans to follow.

The annual Championship is open to all OSC Elite Rewards Club members. The format is designed to reward those players who finish highly in the World Rankings (Top 20 seeded directly into the Championship Bracket), as they have shown a combination of results and regular participation throughout the year (500+ events), earning a high seed! All other club members start earlier in the bracket, either Group Stage or Challenger Brackets. All who play, get paid, and the winner is crowned the undisputed champion of online SC2 competition for the year, securing themself the engraved trophy and a position amongst the games greats in the OSC Hall of Fame.

Seeded into the Championship Bracket (17)

Seeded into the Group Stage (12)

Starting from the Challenger Playoff Stage (9)

1 Zest won 2 of the Mid Season Playoffs thus the 3rd seed was awarded to ByuN who finished in 2nd place of the MSP#3.
2 Bekzhan forfeited his spot in the Group Stage and was replaced by Creator.

Pride of Altaris LE
Krystianer started with a 1-0 advantage due to ByuN postponing the match due to playing in the 2022 GSL ST1 Qualifiers.