The league switched over to StarCraft II competition on 5 June 2012 and ran for two seasons before being disbanded by OGN. 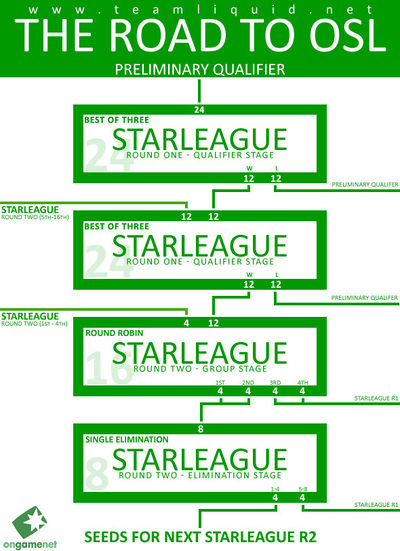 The OSL is a 40-player tournament that takes about four months to complete. There are multiple stages, all of which will be explained. Usually after an OSL is finished, the season has ended and there is a short break. Afterwards, another OSL is started and the cycle continues.

There are two levels to the OSL; OSL (the Starleague) and the offline preliminaries. The OSL is the major tournament and the other rounds are preliminaries to qualify for the OSL. The OSL itself is divided into Round 1 and Round 2 - both of which will be explained. Of the 40 OSL players, those who finish in the top four of the previous OSL are rewarded with what is called a seed. Seeded players are guaranteed a spot in the second round of the next OSL.

The offline preliminaries, or PSL, are the qualifiers for OSC. PSL stands for Pc-Bang Star League and is not the official name, just one that became popular with the Korean communities. The official name is OSC Round 1, but for simplicities sake we just call it the PSL. Any registered Progamer who is a member of a Progaming team can participate in the tournament, and as you can imagine, it is a very very large tournament. There are 24 groups in which only one person advances. The groups generally have around 7 to 8 people each, groups with 7 generally have one player having a bye round. This player is ranked highly on the KeSPA rankings and is given an advantage because of it. Each group is played out like an 8-man single-elimination tournament. Each match is best of 3, as to increase the chances the better player will advance. The 24 group winners then advanced to OSC. Typically the groups are played out over 2 days.

The 12 players that participated in Round 2 of the previous season of OSL but did not receive a seed to Round 2 of the next OSL will get a seed in Round 1 instead. In each of the 12 groups of Round 1, there will be at least 1 player who participated in the previous OSL but did not place in the top 4. The other 2 spots in each group (with 3 players in each group) are given to players that have made it through the OSC/PSL.

The 2 players that came from the OSC/PSL will play against each other in a best of 3 match. The winner of said match will then go against the player who was from Round 2 of the previous season of OSL in a best of three. The match-winner will advance into Round 2 of the current OSL.

In the end, 12 players advance from Round One into Round Two. With the 4 seeded players who placed top 4 in the previous OSL with these 12 qualified players, there will be a total of 16 players.

There are two parts to Round Two of the OSL - the Group Stage and the Elimination Stage:

Each of those groups plays in a round-robin style so that everyone plays everyone else. The top 2 qualifiers from the group enter into the Bracket Phase. Occasionally there are ties in the group, for example 3 players are on 2-1. In the event of such a tie another round robin takes place between the tied players until usable results are attained. For example, if there are three tied players and they each go 1-1, they play another round of tiebreakers until one player goes 2-0, 1-1 and 0-2. This way it allows the players to be ranked even in the event of a tie. If two players are tied first with 2-1, the player who defeated the other one takes the first spot.

Originally, the OSL used a group round robin system similar to the Round of 16 with two groups instead of four to determine the semi-finalists. All players would play on the same day over three weeks, but it was announced by OnGameNet at the start of the Gillette OSL that they would switch to the more fan-friendly single-elimination system.