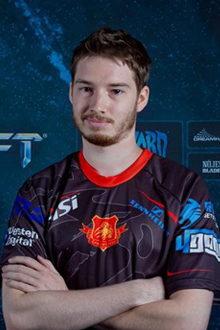 Olivier "Orly" Bellemans is a retired Zerg player from Belgium who formerly played for LowLandLions.

Orly played World of Warcraft for several years and joined SK Gaming on May 4, 2008. Orly played as a priest for SK Gaming under the team name SK-EU with his teammates Xom(Rogue) and Another(Mage). Orly's WoW squad was very successful and won money in many major events, including: 2nd in ESL Leipzig 2008 and 1st in ESL Montreal 2008. Orly left the World of Warcraft pro scene around August 2009 and started practicing Brood War. His practice paid off when he transitioned to SC2 and he joined up with the LowLandLions StarCraft squad on March 2, 2010.[1]

In the StarCraft II beta, Orly was positioned in the Platinum League (Division 7), ranked first with a record of 153-44.[2]

With Orly making the transition into StarCraft II, he has already accomplished many things with the few StarCraft II tournaments that have been held. Orly made it all the way to the finals in the first ever ZOTAC StarCraft II Beta Cup #1. Losing out to DIMAGA by a score of 0-3 and placing 2nd. A week later, Orly participated in ZOTAC StarCraft II Beta Cup #2. Making it to the finals once again and met up with the Swedish Terran player MorroW. Orly and MorroW played a hard series with Orly pulling out a 3-2 win over the Swedish Terran and winning the Zotac StarCraft II beta Cup #2.[3] Thanks to his strong ZOTAC results, Orly has been invited to the ESL TV Pro Invite Cup.

Orly is also credited with creating and utilizing the Roach Feint (vs. Protoss) build.

Orly attended 2011 MLG Raleigh where he managed to seed through the open brackets defeating notable players Gatored, CrunCher and Grubby, only to lose to Noblesse in the finals of his bracket. In the championship bracket, he defeated PainUser 2-0 and then fell to mOoNan 2-1, resulting in him placing 26th at the event.

On October 2, 2011, Orly reached one of the greatest achievements during his StarCraft II career, winning ESL Best of Benelux granting him a paid travel and a slot in the main tournament of DreamHack Winter 2011. There, he raised some eyebrows during the first day of the event, as he advanced from his group beating RunA 2-0 and GoOdy 2-1, while losing to MaNa 0-2. Going in to the second group stage he was arguably placed into a "group of death", with the three EG-players PuMa, IdrA, and HuK. Orly took one map against HuK but lost all other games and got knocked out of the tournament.

On May 13, 2012, Orly participated in the World Championship Series 2012 Belgium and came in first place after overcoming Fauvent, ELVIS, Makouni, and ELVIS again in the finals with a score of 2-0.

On September 15, 2012, Orly played his first game at the World Championship Series 2012 Europe Finals against White-Ra, where he lost 0-2. He then went up against Seiplo in the lower bracket, as he managed to take off one game, he could not fulfill his task and fell in the tournament with 1-2.

On November 9, 2012, Orly was set as inactive for the time being. There was the possibility that he would return when Heart of the Swarm was released, however he has not done so.[4]