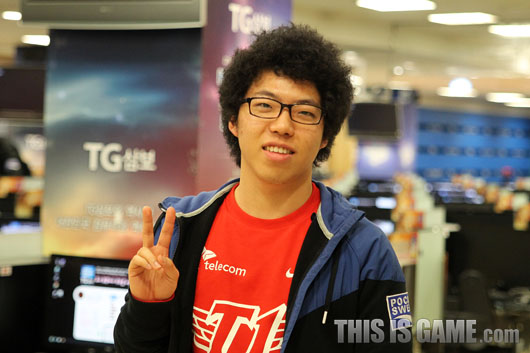 He earned the name 'Afrotoss' for his curly black hair.

ParalyzE's HotS career started when he participated in the GSL Season 1 Qualifier. He made it to Challenger by winning Group K of Day 2 Afternoon over BiFrost 2-0, teammate Classic 2-0 and Genius 2-1. In the Ro48 of Challenger League, ParalyzE played BBoongBBoong whom he defeated 2-0, advancing to the Ro32 he played YugiOh and once again won, this time with a score of 2-1. Now in the Ro24, he faced off against soO. The zerg would prove to be too powerful and ParalyzE fell 0-2. His run would still seed him directly into the Ro48 for next season.

Now in Season 2 of WCS, ParalyzE would have to defeat Dream to advance into the Ro32. Unlike the previous season, ParalyzE was not able to recreate last season success and fell 0-2 to the Terran.

With his run from last season ParalyzE was seeded into the Ro48 of Challenger League for Season 3. Looking to achieve better results, he was pitted against YugiOh once again. Playing even better then in Season 1, ParalyzE 2-0'd the zerg. Now in the Ro32 he played CoCa but lost 0-2 and his GSL run was cut short for 2013.

With a different system for 2014, ParalyzE would have to re-qualify to participate in the GSL. He went trough the online Qualifiers and played in group 7 of the morning session. ParalyzE advanced first in his group taking out Venus, KangHo and sKyHigh, dropping only a single map to Venus. In Code A, he was drawn in group H. He finished 3rd, losing 1-2 to Life, winning 2-0 over sKyHigh then losing to Life again 2-0. It seemed like he was out of the GSL but jjakji switched to regions in favor of WCS Europe. Thus, a Wildcard Tournament was set up for every 3rd place finisher in groups. In group B, ParalyzE beat Trust 2-1 then GuMiho 2-1. He advanced to the Round of 3, a round robin group with Dream and Cure. After the initial 3 matches all three players were tied 1-1 apiece. A tiebreaker was played and it ended with a three way tie once again. This happened 3 more times and finally in the 4th tiebreaker ParalyzE was able to beat Cure and Dream and advanced going 6-4. In Code S, he was placed in group H. He finished last place going 1-4, losing 0-2 to Curious, then 1-2 to RorO. This finished his Season 1 finishing in the Ro32.

From his previous successful run, ParalyzE was directly seeded into Code A. He was placed in Group D and topped it. In doing so he beat Cure 2-0, then YongHwa 2-0. Back in Code S, ParalyzE was placed in Group E where he finished second overall. He started by losing to DongRaeGu 0-2, then beating MyuNgSiK 2-0 and finally redeeming himself against DongRaeGu 2-1. Now in the Ro16, he was drawn into group B with Rain, Solar and Life. ParalyzE won series against Life but lost against Solar without standing a chance. Ultimately, he was able to win once more against Life and advance into the Ro8 for the first time in his career, and secure a seed in Code S for the following season.

There he met his T1 teammate Classic. Paralyze was able to win the first game, but after losing the second game while having a considerable advantage in midgame, Paralyze fell 1-3 to Classic who was able to take the championship later.

On January 30, 2015, SKT officially announced that ParalyzE had decided to retire.[1]