Photon Cannon (Legacy of the Void)

This article covers the current multiplayer version of this building. For another version see Photon Cannon (Wings of Liberty and Heart of the Swarm). 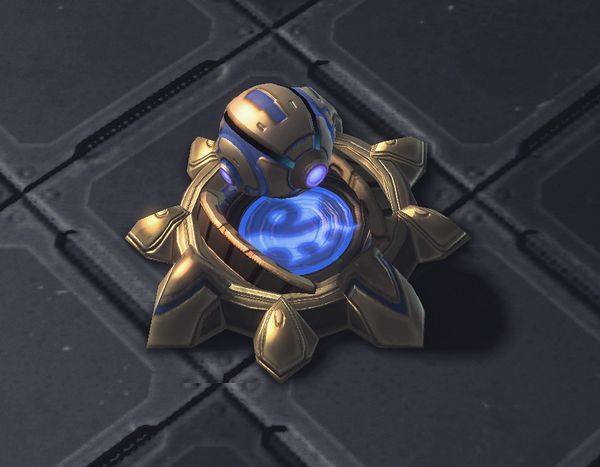 The Photon Cannon (often shortened to just Cannon) is the sole static defense building for the Protoss. The player must control a Forge before building Photon Cannons. It's more versatile than its Terran and Zerg counterparts as it can attack both air and ground units. Photon Cannons also serve as detectors with an extremely large vision range.

Like most Protoss structures, the Photon Cannon can only be warped in at a location powered by the Psionic Matrix. It can attack and serve as a detector only while it remains within the Matrix, otherwise it becomes unpowered and cannot function.

When placing a Photon Cannon, a white ring appears along with the green ghost outline of the cannon. This ring indicates firing range only. The visual and detection range of the cannon is nearly 60% larger than the firing range. If you simply need detection around your mineral line or other area and not necessarily the attack capabilities a single cannon can easily supply vision for the mineral line against ranged attackers such as Ghosts and Banshees.

Players typically will build Cannons in or around their mineral line to protect against (or, belatedly, to react to) harassment. In late stages of the game, expansion bases that the player deems difficult to readily defend will often be bolstered by a few Cannons as well.

Photon Cannons can be used to detect and therefore limit the effectiveness of Dark Templar as well as defend expansions later in the game as harass becomes more common.

Photon cannons can be used as a fallback detector if your Observers get picked off. This is critical as losing sight of cloaked Banshees or Ghosts can easily cost you the game.

In some cases Photon Cannons may be a more effective mineral sink than investing in Zealots, especially on defense. For example, Photon Cannons can take advantage of shooting from high ground, while you Force Field a ramp.

The range of the Ghost's Tac Nuke Strike is 10, while the vision range of the cannon is 11. The cannons can act as a good deterrent to nukes striking much deeper than your cannons for the cost of minerals only.

The Photon Cannon can be used offensively in the beginning of the game. This is primarily done to kill/cancel a Zerg's natural expansion This can be used to:

Cannons can also be used to help defend against Mutalisk harass along with shield batteries.