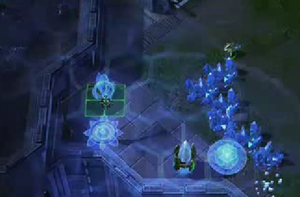 Note protection of first Cannon by Pylon and minerals 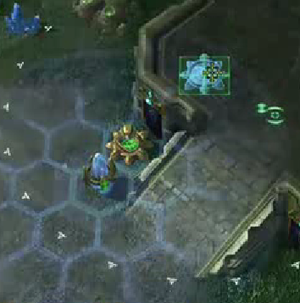 Note protection of first Cannon by Pylon and ramp

In general, a Photon Cannon rush consists of a Probe placing a hidden Pylon just outside the enemy's vision, and building additional Pylons and Photon Cannons closer and closer to the enemy's buildings and mineral line. Deciding when to send the first Probe is important as, above all else, the success of a Cannon Rush depends on the element of surprise. This means that any strange play early on may tip off the opponent that a Cannon Rush is imminent. It's generally recommended that a player send their first Probe after building their first Pylon, which is early enough to scout the opponent without hinting that a Cannon Rush is imminent.[1]

Once a player discovers the location of their opponent, a Forge should be immediately built. Ideally, the initial Probe should go unseen and construct the first Pylon outside of the opponent's vision. If the opponent discovers this initial Probe, it may be beneficial to attempt to build the first Pylon in a location where cannons would have a greater effect, such as behind the mineral line.[1] Regardless of placement, the initial Pylon should be started before the Forge finishes to allow for the earliest possible rush. Once the Pylon finishes, the Forge should be complete, and the attacking player can begin building Cannons. If the rush is yet undetected, the initial Cannon should be placed near the initial Pylon to defend it; otherwise the Cannon should be placed to optimally engage defending forces. No Cannons should be allowed to be destroyed while constructing, any that are near death should be cancelled to recoup 75% of the mineral cost of construction.

A typical adaptation of the Cannon Rush is to use Pylons to completely wall off Cannons behind the mineral line.[2] The idea is to make it impossible for the defending player to attack the Cannons with workers or melee units, while being able to completely deny mining in the main. The strategy works best on maps that have locations in the main that can be completely walled off using 3 or fewer Pylons, with good examples being Daybreak and Derelict Watcher.[3] In this adaptation, it's recommended that the attacking player save up 300 to 400 minerals to be able to build the blocking Pylons in quick succession, followed by the Cannons inside the wall once these initial Pylons complete. It's best to build the first Pylon in the location with the smallest gap. At least one open hex should be left behind each Pylon so they can be quickly rebuilt if they are destroyed by melee units, which would otherwise prevent the Pylons from being rebuilt in the same location.

The success of a Cannon Rush depends greatly on the response of the opponent, often players will be caught off guard and either respond too harshly by sending all workers to attack the initial Pylon; or they respond too lightly, often by only sending one worker to attack the Probe building Cannons.[1][2]

In PvZ, you should open as if you're going for a FFE, with the Probe that builds your initial Pylon being sent out to scout what your opponent is doing. If your opponent is opening with a Spawning Pool before expanding then you should expand as normal and abandon the idea of Cannon Rushing, which is partly because Zerglings should be able to prevent your Cannon Rush from doing any damage and partly because the Zerg doesn't gain an economic advantage by opening Spawning Pool first against a FFE.

If the Zerg player does go Hatchery First, then you should start building Pylons behind their natural mineral line such that your eventual Cannon will be defended from attack by either Drones or Zerglings. If your rush does not go detected, then do not build your Cannons as fast as possible; instead wait for the Hatchery to get to ~1000 Health before placing down your Cannons as this will prevent your Cannons from attacking before the Hatchery finishes (which would allow the Zerg to cancel the Hatchery). If the rush does go detected, immediately throw down Cannons and attempt to get the Zerg player to cancel their natural expansion. If they do cancel the expansion then cancel all but one of your Cannons and expand as normal.

On some maps, it is possible to rush both the natural and the third base of the Zerg from the same position. A notable example of this is Alterzim Stronghold. On these maps, Cannon Rushes can be incredibly strong against Zerg opponents.

Scouting is the most important aspect of countering a Cannon Rush. This involves scouting around both your base and the opponent's base.[4] If a player sees a Protoss opponent who has gone Forge first and has only a single Pylon in their main, that player should immediately begin scouting their own base for a Pylon. Regularly check inside your base until you have units guarding your ramp; this can be done by placing buildings (or Overlords) around the base.

The better way to effectively defend a Cannon Rush as Protoss is to scout the attempted attack in time.[4] Once scouted, the defending player should immediately build their own Forge and immediately start building defensive Cannons slightly out of range of the opponent's Cannons. The aim is to use defensive Cannons to prevent the attacking player from building Cannons within range of any important structures. It's recommended that the defending player maintains parity or exceeds by one the number of Cannons the attacking player has built. The defending player may also use Probes to attack Cannons that are being built, provided there aren't any Cannons in range to protect the building Cannon from attack.[4] Once the opponent gives up their Cannon Rush, continue teching as normal whilst being vigilant against sneaky attempts to resume the rush from another angle.

Another method that can be used to defend against a cannon rush if the rusher has placed his first pylon far enough away is to rush to a robotics facility. After you have warped in a robotics facility you should warp in two immortals. Near the cannons but out of range, get a probe to warp in a pylon and 2-4 shield batteries. What you want to do now is move the immortal(s) into range and attack one of the cannons. When your immortals are at about 25% shields you should retreat to your shield batteries, charge up your shields and attack again. If you carry on with this the opponent will eventually fall under the merciless assault of immortals.

Terrans have an advantage in dealing with Cannon Rushes as Marines are excellent at taking out Probes constructing Pylons.[1] Marines are especially useful if the opponent has walled themselves in behind the mineral line with Pylons, as Marines can easily pick off Probes in such a scenario. Terran can also Lift off and move production buildings that may be in range of the Cannons, or even lift their initial Command Center and move it to another base so that the Protoss players initial Pylons and Cannons are useless.[1]

If you already have a factory when the first cannon is warped in in then it is suggested to build a few siege tanks to counter the cannons due to the fact that tanks in siege mode outrange cannons by a significant amount.

Instead, it is much more likely that a Protoss player will Cannon Rush in response to a Hatchery First opening, which they can only do if they were originally planning to go for a Forge Fast Expand. The guide, Reacting to Cannon Rushes, covers what to do in this situation.