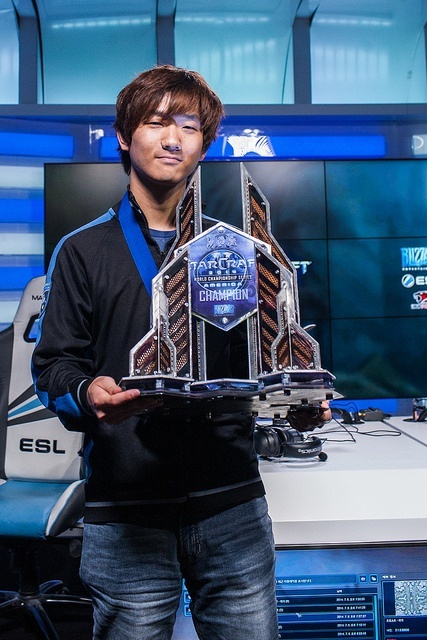 Pigbaby played a total of six games for 8th Team / Jin Air Green Wings in the 2013-14 seasons of SPL. He notably defeated Zest, RorO, Rain, Hydra and DeParture, before finally losing to Super. Less than a month after the end of his streak, he was removed from Jin Air's roster alongside CoCa, leaving him with a 5-1 record.

Pigbaby attempted to qualify for 2014 WCS Season 2 America, he played in the Ladder Wildcard qualifier where he defeated PiLiPiLi, SaroVati, iAsonu, and Ryung, a very strong, high level, Korean Terran Player to qualify for Challenger league.

Pigbaby's opponent in Challenger league was the Taiwan Protoss Player Has, whom Pigbaby defeated 3-1, qualifying himself for Premier League. In the Round of 32, he played in Group A, with Revival, HuK, and HerO. He defeated Revival with a score of 2-0 in his first match, and the Canadian Protoss HuK 2-1 in his second match, placing him at the top of the group and advancing him to the next round of the tournament.

In the Round of 16, he was placed in Group A this time with Heart, Oz, and XiGua. He lost against Heart, but then defeated Oz and XiGua to advance out of the group in second place. In the Round of 8, he was seeded against TaeJa, who was a heavy favorite for the WCS title. However, Pigbaby disposed of the Terran player 3-0, showing a great use of observers in every game, causing cheers from the crowd. Expectations grew up as he defeated the winner of Season 1, HyuN, with a score of 3-1. In the finals, Pigbaby lost three of the first four matches against his opponent Bomber, but was able to turn the match around and win 4-3 in the end. The series featured Carriers in Game 1 and Tempests in the last and deciding game. With this victory, Pigbaby became the 2014 WCS Season 2 America Champion in his first WCS America participation, making a name for himself in the foreign scene.

In the 2014 WCS Season 3 America Premier League, Pigbaby advanced second in his Round of 32 group after defeating the Chinese Protoss Shana twice while losing to Check in the winner's match. In the Round of 16, he lost 0-2 to HyuN, but defeated Jaedong 2-1 and TaeJa 2-0 to advance to the playoffs. In the Round of 8 he faced Bomber in rematch of the Season 2 finals, but this time fell 1-3, and in the Best of 5 was unable to mount a similar comeback to the previous season's.

Despite his achievements in WCS America, Pigbaby was unable to acquire overseas support through sponsorship or a team. Additionally, changes in the 2015 WCS system required him to cease participation in WCS America. He therefore returned to Jin Air Green Wings on December 1, 2014, to resume competing in Korea.[1]

On October 30, 2015, he decided not to extend his contract with Jin Air Green Wings and left the team.[2]