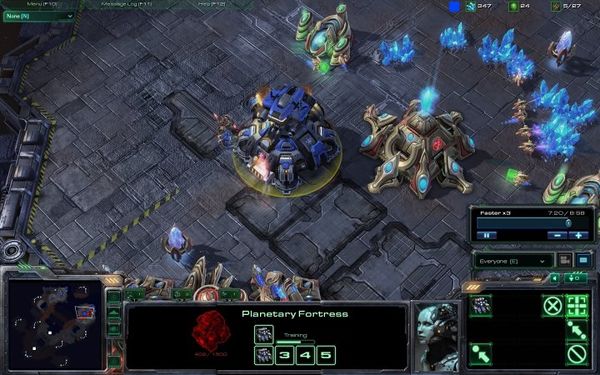 Along with any variety of SCV rush - this build is one of the most 'all-in' builds a Terran can perform. However against an opponent who has not faced it before, or was doing an eco-friendly build - this build can be a success. Keep in mind this build cannot be performed against Zerg due to the creep blocking the Command Center landing. Also, note that this is not viable against Terran, because they can simply lift their Command Center and take a new base the second you start your Planetary Fortress. Since Planetary Fortresses cannot be lifted, this leaves you to mine from a sub-optimal position. This guide is designed for use on Scrap Station - however it is possible to execute this build on Desert Oasis, though timings may differ.

The first and only goal of this strategy is to eliminate the opponent. If you cannot perform this - it is theoretically possible to continue - however you will be at a terrible disadvantage, depending on how your opponent performed.

The key to this build is to get optimal positioning on your Planetary Fortress so that it threatens your opponents Nexus/Command Center or key buildings, such as Pylons, Supply Depots, Barracks or Gateways. Thus the initial SCV scout needs to stay alive as long as possible to make sure there is sufficient room for you to land and setup your Fortress. If your opponent has clustered buildings (all grouped around the Nexus/Command Center) this can be detrimental to your attack. If this occurs, the Marines you produced from the Rax will be the key.

On Scrap Station, with a lift-off at roughly 4:30, your Command Center should then land on the opposing side at roughly 5:50. Upon landing, unload SCVs and immediately begin the construction of the Planetary Fortress. This will then take 50 seconds to build, at which point your opponent will most likely begin to attack the spawning Fortress. Use your unloaded SCVs and any SCVs that made the ground-trip, to either attack the defending units, or repair the Command Center.

While your Command Center is converting to the Fortress and your SCVs are attempting to protect it - use the Rax to produce Marines to harass the opponent mineral line. You should have at least 300 minerals left-over, so a few Marines should be built without delay. Rally these Marines into the mineral line. The Marines shouldn't have any opposition, as your opponent will be attempting to stop the Fortress from finishing. 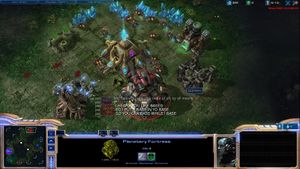 Mining from the opponents minerals

With a normal landing time of 5:50 as previously stated - your Fortress should complete at roughly 6:20-6:40. Commit all SCVs to repairing, however if your opponent has a heavier army than normal (they sacrificed economy intending to attack your base early) you may need to use the SCVs to help clean up the forces. If your minerals run low, it is even possible to mine from your opponents minerals to restock. When mining in the opponents base, beware of ranged units picking off your SCVs from outside of the firing range of the Fortress.

Make sure that you build SCVs if there are extra minerals - however keep in mind you will need to build Marines to clean up any further forces/workers, especially forces that are harassing your miners.

As noted from the Planetary Fortress article;

Your Planetary Fortress will eliminate workers in 1 shot, early Terran units in 1 to 2 shots, however Protoss units will take longer:

Early scouting and good build recognition can mean your opponent will see this attack coming, however in some cases, if they have already committed to a certain build, you can still be successful.

If a skilled player recognizes the attack coming, a simple, yet extremely effective counter, is to simply place units underneath the Command Center to prevent it from landing. You can counter this in two possible ways:

Players who encounter this build are likely to just spend all available resources on getting any low-tier units in a futile attempt to destroy the Fortress. However, a simple counter to this build is to save up 400 minerals and rebuild a new Command Center/Nexus elsewhere. This effectively counters the Fortress Rush - though it is quite likely that both players will be on an even footing - the attacking Terran will have little resources, a low SCV count and barely any Marines - but the opponent Terran/Protoss will be in almost the same position.

A Terran or Protoss who "clusters" buildings may make landing the Command Center hard - that is, placing Supply Depots or Pylons in spaced positions that do not allow the large amount of space required to land the Command Center. You can attempt to counter this by attacking the buildings with the proxy Marines or SCV group.

At the current time with the limited map scope; Scrap Station is the only "feasible" map for this build. Desert Oasis however can work, though the longer flight distance makes the build more risky.