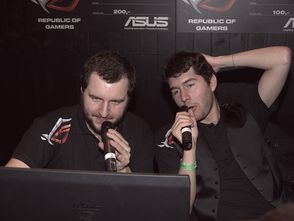 Alexandre "Pomf" Noci and Hadrien "Thud" Noci (always referred to "Pomf et Thud" i.e. Pomf and Thud) are two French shoutcasters who are known for hosting the most popular YouTube channel dedicated to StarCraft II in French. They are considered to be casual shoutcasters, for whom the entertaining aspect of the shoutcasting takes precedence over the analytical aspect.

Pomf & Thud had no previous involvement in eSport before StarCraft II. As Broodwar players, they were fans of korean streams and, praising their highly dynamic style, decided to entertain their audience rather than focusing on a detailed analysis (although they may introduce deep, short analysis highlights during their casts).

Pomf & Thud released their first VoD during the late stage of the beta, in June 2010. They quickly made a name for themselves for the eccentricity of their work, and soon gathered more viewers than any other French-speaking shoutcasters. On September 2010, they partnered with aAa [1], but later preferred to remain independent. They commentated on stage several offline live events such as MaXlan 2011, the World Cyber Games 2011 Qualifiers France, the Electronic Sports World Cup 2011 and more.

Their growing fame led several mainstream medias to highlight their work, which is quite unusual given that the French society often pillory the practice of video games. [2][3]

On top of their shoutcasting work, they produced two live events called "O'Gaming". The first edition was a giant barcraft held in June 2011 in Paris, and featured SarenS, MoMaN and Adelscott. The second edition was held in the Bataclan theater on November 2011, and featured ThorZaIN, HasuObs, SarenS and MoMaN who played onstage (the foreign players had been invited by a sponsor), as well as Vs Fighting showmatches (See below).

On October 18th 2011, Pomf et Thud in partnership with the Vs Fighting shoutcaster Ken Bogard released a teaser announcing a second edition of the O'Gaming, a casual event featuring StarCraft II, Super Street Fighter IV AE and The King of Fighter XIII showmatches, as well as other entertainments [4]. Thanks to the sponsors of the event, several foreign professional players (ThorZaIN and HasuObs for SC2, as well as Kindevu and Ryan Hart for SSFIVAE) were able to attend on stage. The event was held in the Bataclan theater [5]. A month later, another French shoutcaster, ZeratoR, released a video entitled "Runby in Paris" featuring on-stage footing of the event, as well as details of Pomf & Thud's work method [6].

On October 2011, Pomf and Thud created a production company, "Alt Tab Productions", in order to make a living out of StarCraft II, through a Web TV[7] They eventually unveiled the O'Gaming TV on December 5, 2011, which will also feature the fellow shoutcaster ZeratoR, as well as League of Legends and versus fighting broadcast.[8][9] One month after the launch of the WebTV, on January 14, 2012, the Iron Squid tournament was announced with Pomf and Thud as the main shoutcasters.[10] The next step of P&T's development occurred on March 14, when the French videogames website Gamekult partnered with the MLG in order to allow Pomf and Thud to shoutcast the events of the 2012 MLG Pro Circuit and 2013 MLG Winter Championship.[11]

The duo created a new starleague entitled "Iron Squid" in 2011; its first edition took place in early 2012. A huge, international success, Iron Squid – Chapter I featured twenty top-players during online playoffs and a Grand Final live show in Paris, France. The second edition gathered thousands of viewers, 2500 of them being live attendees in what was praised as one of the best tournament of the late Wings Of Liberty area. As for the first edition, it was more than just StarCraft and featured a live orchestra, several show matches on the soon-to-be-released HOTS and many guests on stage. A third edition is currently pending.