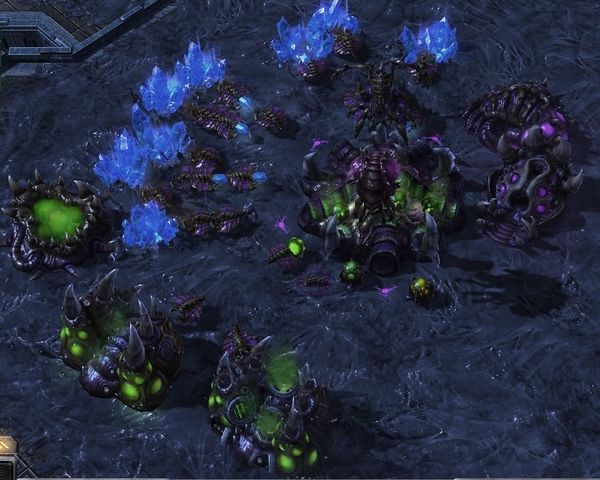 The standard response to the Protoss Forge Fast Expand (FFE) is the Pool First, Double Expand (also known as 3 Hatch Lair). This build, popularized by Incredible Miracles Zerg Nestea, revolves around "countering" the Protoss Fast Expand --> Gateway pressure with an unusually fast Metabolic Boost, coinciding with the standard double expand after Spawning Pool. This build is an excellent way to catch opponents that rely on Gateway pressure out of a FFE with their pants down, because you are able to get surrounds on Zealot/Stalker pressures, deny fast third bases, and if you're lucky, can even force extra cannons from the Protoss player, who might think you are doing an all-in build, since your speed is so much earlier than usual.

Currently, the standard response against Protoss fast expand builds is to take a faster than usual third base (for mining purposes). Your goal is to have 3 Hatcheries, 3-4 gases, a Roach Warren, 1-2 Evolution Chambers, 3-4 Queens, and anywhere from 58-70 Drones at the 8 minute mark, while maintaining proper ling scouting for hidden Pylons, and Overlord scouting the Protoss main and natural.

You do not always have to make a large number of Drones early in the game. Many players like to do a Roach/Zergling pressure attack on their opponent in order to kill their Sentries (or at least deplete their energy by forcing some Force Fields) when they do a 3-Gate Sentry Expand or a similar Sentry focused build. In those cases, the Zerg will often start making the 3rd Hatchery as they begin their attack, and will resume making Drones once the attack has finished.

Staying on Hatchery Tech for a long period of time requires you to spot what Tech Protoss is getting and be able to immediately respond. Protoss has a few different builds and attacks that they can prepare, so being able to scout and respond to all possibilities is key in letting you defend with the minimum number of units required to and to keep up an economic advantage.

The most important map feature for this build to work is a nearby 3rd base that does not have Destructible Rocks blocking it. This includes maps such as:

This allows the Zerg to take a 3rd base as fast as possible, without requiring the use of attacking units to break any rocks.