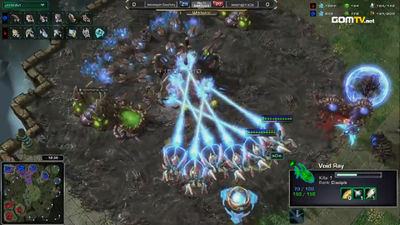 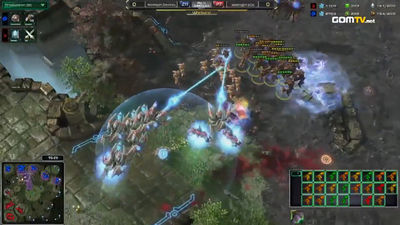 sOs showing everyone who's boss

The Void Ray/Templar/Zealot PvZ style is perhaps the most innovative build that emerged after the release of HotS. The basic roots of the playstyle comes from the mass Skytoss builds of the HotS beta, and to a lesser extent from standard play in Brood War, where focusing on High Templar and Zealots after a Stargate opening is the norm. It was first refined by Woonjing Stars Protoss players and particularly sOs, who showed just how devastating it can be in the WCS Season 1 Global Finals as he made Soulkey, the best Zerg in the world, look confused and even sloppy in their Ro4 match. Since then the metagame and builds have shifted and evolved, but the core ideas remain powerful today. Along with other notable players such as NaNiwa, sOs continues to focus heavily on this unit composition and enjoy great success with it. A flashy and deceptive style in pure sOs fashion, it can be considered as a middle ground between hyper-aggressive 3base Blink timings, and the slower, safe and methodical Colossus/Stargate builds that have been used in PvZ since 2010. Blink Stalker 3base builds need to hit a powerful midgame timing or not scale well enough in the endgame against zerg tech and production, and Colossus builds can be powerful but immobile, slow and exploitable by tech switches. The Skytoss/Templar style on the other hand can allow protoss players to be take map control and play aggressively almost as fast as the Blink Stalker styles, without the need to commit to an attack and with an extremely powerful lategame. The price to pay for this added versatility is the need to utilize greedier and/or trickier openings, resulting in a third base that can sometimes be harder to defend from midgame attacks. Additionally, the heavy tech investment of this style results in a lower Sentry count, and therefore in less energy for Hallucination scouting. Also, you get to feel like Bisu every time you beat someone which is pretty fucking awesome. From now on this style will be called The Bisu Build because every PvZ build with zealots templar and flying units is the Bisu build anyway. This guide will walk you through the early game (defined as the part of the game in which the protoss player executes his favored opening that leads into this style); midgame (the portion of the game in which the protoss is on 3 bases and has to react to the zerg's decisions of either teching up to lair or hive tech, or going for a lair based bust), and lategame (once the protoss tech investments fully kick in and he's free to take map control and a 4th base).

Mutalisk play is moderately popular in ZvP, and dealing with those mass Mutas is a common problem for Protoss players. Going for a 2 base all-in to try to kill the Zerg before or right as he gets Mutas is certainly a viable option but that is dodging the problem, rather than dealing with it. This page outlines how to play a long macro game against Mutas.

Builds that blindly mass Sentries at the beginning are bad, particularly if the Zerg is going Mutalisks. Getting to 8-12 Sentries early game seems to be very common in PvZ, but it is often not a good idea, unless going for a quick 2 base all-in. Guardian Shield is great against the bounce attack of Mutas, but the Sentries are often going to get sniped quickly, ending up just as a huge waste of gas that could have been better spent on additional Stalkers and HT. Sentries are also ineffective against Infestor/Ling play, Baneling play (with Overlord drops, and any more than a moderate amount (like 4-6) will be a waste against early 2 base Hydralisk play. Start with 2-4 sentries (note this is starting with a FFE, so if you're Gate expanding you could use a few more) and only add more if you scout Roaches.

Gameplay Elements & General Mechanics
Protoss vs Protoss - Protoss vs Terran - Protoss vs Zerg
How to: Wall-In at Natural (vs. Zerg)

"Heart of the Swarm" Builds
edit