Prime was a Korean Team and clan. They were founded near the launch of Wings of Liberty. Near launch they were announced to be sponsored by the World Elite, but this sponsorship was eventually dropped.

In October 2010, Prime took part in the Brainbox Team Invitational placing third after oGs who won and the now disbanded team WeRRa that placed second.

Prime lost 2 players, Maka and Polt, on the opening day of the GSL Code S Sponsorship League. HongUn and anypro were later eliminated as well. MarineKing was the only Prime member that made it through Ro32, eventually making it to the finals where he was decisively defeated 0-4 by Mvp.

Going into February, Prime had 5 Code S players: MarineKing, HongUn, Check, anypro, and Polt. Maka and Polt were both defeated in the Up and Down Matches, putting them in Code A. A tournament was held to decide which player, of the 8 players who went to Code A from Up and Down matches, would replace LiveForever who was entering military service. Polt won the tournament, putting him back in Code S. Maka remained in Code A.

The "Optimus" ID, which references Transformers Autobot leader Optimus Prime, has been an ID MarineKing popularized in his first GSL finals, but never took up for himself since he never won a championship. The Prime coach has said that the "Optimus" ID will move around the team to the current Prime champion.[1] Polt was the first Prime player to win a GSL championship, so he was the first player to hold the title. After his switch to TSL, the status of the Optimus title is currently unknown.

Prime also has their own online clothing store which includes their team shirts as well as other merchandise. The clothes are all modeled by Prime players, with more of a focus given to MarineKing and Gerrard.[2] The store initially only delivered to Korean addresses, but opened up to international deliveries on September 24, 2011.[3]

Prime did not have much success in the team leagues in the first three seasons as they would always lose in the first round. However, in the GSTL Season 1, they pulled an upset by making it out of the group stages and into the play-offs where they eventually were defeated by MVP in the finals to place second.

Prime went one better during the 2012 GSTL Season 1 taking victory over StarTale with MarineKing taking victory over Curious to win 5-2 over all. The finals were the first GSTL finals to be held over seas, taking place in Las Vegas, Nevada.[4] The 3 months between March and June would prove to be incredibly successful for Prime, winning the IPL Team Arena Challenge 2, 2012 Global StarCraft II Team League Season 1 and 2012 KSL Team League Season 1 over New Star HoSeo, StarTale and StarTale again respectively. The KSL victory was notable for a 6 man all kill by MarineKing.

In October 2015 Prime was reported to be involved in a match fixing scandal. Head coach Gerrard and players YoDa and BboongBboong were found to have intentionally lost five matches in the first half of the year for money.[5] As ByuN and KeeN had left Prime just a day before the news came out, the team is now left without any active players on its roster. 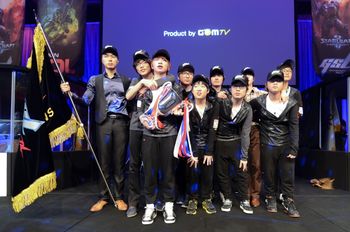