Probe (Legacy of the Void)

This article covers the unit. For the Australian Protoss player, see Probe (player).

This article covers the current multiplayer version of this unit. For another version see Probe (Wings of Liberty and Heart of the Swarm). 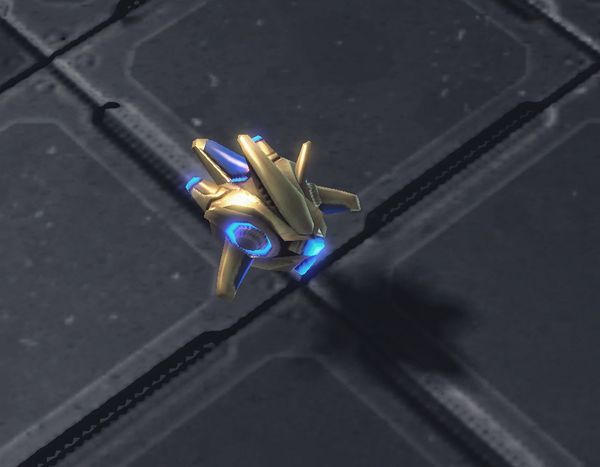 The Probe is the Protoss worker unit, warped in at the Nexus. It harvests resources, has a low-powered melee attack, and can warp-in any Protoss building. All Protoss buildings other than a Pylon, Nexus, and Assimilator must be built within power range from a nearby Pylon or Warp Prism. Unlike its Terran and Zerg counterparts, the Probe does not have to remain in place to keep working on a building being warped in, and it instead can perform other tasks, such as warping in more buildings or returning to harvest resources.

The Probe's regenerating Plasma Shield sets apart the Probe from the SCV and Drone as well. Especially in the early stages of the game, shields play a very large role in the scouting and harassment abilities of the Probe, as a skilled player can avoid pursuing units (such as Zerglings or Marines) well enough that any damage to the shields will be quickly restored. Other common uses stemming from these attributes are delaying Hatchery or Spawning Pool placement and harassing building SCVs.

Like all worker units, Probes are often used to scout, harass, and gain control of Xel'Naga Towers. Probes are also frequently sent around the map to build "proxy" Pylons in key locations to give vision and enable reinforcements to warp in.

Probes have a faster movement speed than the Zealot, meaning that (if skillfully maneuvered) they can continue scouting the opponent's base in the early game until a Cybernetics Core and a unit with a ranged attack (a Stalker or Sentry) are warped in.

The initial scouting Probe is often used for attacking SCVs as they construct Terran buildings, and can harass further by blocking building/add-on placement. Harassing SCVs that attempt to construct buildings can force the Terran to pull additional workers to defend the building SCV, further reducing the Terran's mining rate. The Probe is free to attack the helpless SCV before additional workers can arrive to repel it. Due to its shields, the Probe can withstand a few attacks from reinforcing SCVs, and retreat to safety when its shields run low. As the Probe flees to regenerate its shields, the Terran has to swap the damaged SCV with a new one. When the Probe reaches full shields again, it can resume harassment. At its best, this will result in several wounded SCVs before the first Marine comes out.

The initial scouting Probe is often used to delay an early Zerg expansion, either by warping in a Pylon to block the Hatchery from being placed at the optimal position, or by dancing around the location to prevent the Drone from building in the necessary position. These techniques are often combined to further delay the Zerg's expansion, by planting a Pylon after dancing with the Probe.

The Probe is the standard unit which is used to determine time and/or distance between bases when describing a map.