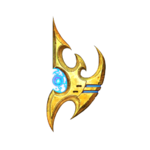 With their highly advanced technology and potent psionic abilities, the Protoss once considered themselves the most powerful species in the galaxy. Their war with the Zerg has proved otherwise: even the most individually capable warrior cannot overcome such insurmountable numbers. The lesson has been a hard one for the Protoss, for their society is built around core philosophies that have been rigidly adhered to for over a thousand years. However, the Zerg invasion of the Protoss homeworld of Aiur has brought the race to a crossroads: the Protoss must embrace change if they are to survive and prevail. Now new tactics and technologies are being brought to bear in the increasingly desperate battle against the Zerg, and ancient, terrible weapons the Protoss set aside long ago are being unleashed.

The Protoss have never been a prolific people and have traditionally bolstered their numbers with a variety of robotic war machines. Individual Protoss warriors are unsurpassed in their skills, greatly enhanced by the combination of technology and formidable psionic strength. Nonetheless, the Protoss must rely on mobility and surprise to maximize their advantages without getting drawn into a battle of attrition. One of their greatest strengths lies in their fleet, which boasts a variety of ships powerful enough to pound an enemy to atoms.