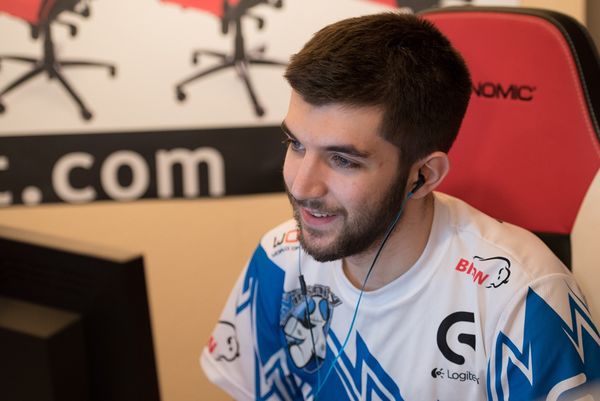 Théo "PtitDrogo" Freydière (born November 9, 1995) is a French Protoss player who is currently playing for Altar.

In 2014 PtitDrogo regulary played in a lot of online cups and was able to make a name for himself in the European and especially in the French Starcraft scene. However he was not able to qualify for WCS and only participated in the 2014 DreamHack Open: Stockholm where he dropped out in the second groupstage.

PtitDrogo qualified for WCS 2015 Season 1 Challenger, by defeating Snute 2-1 in the Round of 8 of second European qualifier. He faced Bunny in Challenger, but was quickly defeated 3-0. After this PtitDrogo was not able to re-qualify for WCS in this year. Notably he participated in all three 2015 DreamHack events, but was only able to reach the Round of 32 twice.

PtitDrogo's best results in Heart of the Swarm came in July 2015, right after joining mYinsanity on June 29, 2015. Together with his fellow Frenchmen Lilbow and MarineLorD, he was able to reach the round of 8 at HomeStory Cup XI, earning himself $875. Later this month, PtitDrogo participated in the ASUS ROG Summer 2015 tournament. After barely making it out of his Round of 32 group, he went on a 9-0 run in the Ro16, Ro8 and semi-finals, defeating KeeN, uThermal, Apocalypse and HyuN. In the pregame interview, PtitDrogo was confident that he would beat Losira in the finals, but unfortunately Losira was too good and PtitDrogo lost 2-4. The second place still secured him $3000 and 200 WCS Points, making this his best result in Heart of the Swarm.

PtitDrogo qualified for the DreamHack ROCCAT LotV Championship, the first Legacy of the Void premier tournament. In the group stage, he was able to win against Firecake and Happy, but lost against puCK, Zanster and Bomber. With this, he finished 5th in the group, already dropping out of the tournament.

PtitDrogo also qualified for the second LotV premier tournament, HomeStory Cup XII. He swept his Ro32 group, going 2-0 versus Scarlett and Lambo. In the Ro16 he was seeded into a tough group with Snute, HyuN and TOP. After initally losing 1-2 to Snute, PtitDrogo was able to beat both Koreans 2-0 and secured his first back-to-back HSC quarterfinals. In these quarterfinals, he was ahead 2-0 against the Polish Zerg player Elazer, but was ultimately defeated 3-2.

Towards the end of January, PtitDrogo participated in the 2016 DreamHack Open: Leipzig, which marked the kick-off for the new 2016 WCS Circuit. PtitDrogo had no problems advancing to the playoffs sweeping his group 4-0. In the Ro32, he met the Polish Terran player Basior whom he defeated 3-1. His next opponent was Neeb. PtitDrogo was able to secure himself a 2-0 lead but Neeb came back winning the next two maps, before PtitDrogo was finally able to advance as he won the fifth map. In the quarterfinals, PtitDrogo had to play local hero TLO. Despite fans cheering for TLO, PtitDrogo was able to secure a close 3-2 victory and thus moved on to the semi-finals. There he faced uThermal, who had already beaten Harstem and ShoWTimE decisively before. Similar to what happened against Neeb, PtitDrogo was able to win the first two maps but then lost the next two before winning the final map, which meant that he would advance to his first Premier Tournament finals. Here he met Bly, who had knocked out the two Koreans Hydra and viOLet in his previous matches. Both players were eager to win, but PtitDrogo safely secured a 4-1 victory and thus won his first premier tournament as well as $16,000 and 1,000 WCS Circuit Points.