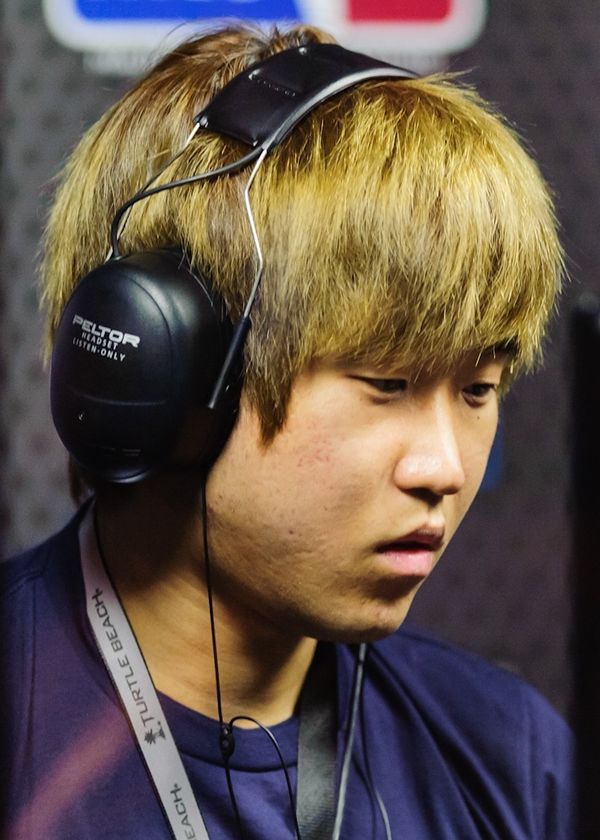 In Brood War, he played for eSTRO and Hite Sparkyz.

Starting out on eSTRO, PuMa was traded to Hite Sparkyz for the beginning of 2010 after struggling to make it into eSTRO's A-team Terran line. He made his Sparkyz debut on the 10th of February 2010 in the Winner's League and in only his second lineup appearance, he performed an All-Kill against Air Force ACE.

Since joining Team SCV Life, PuMa has been unable to breakthrough in the GSL qualifiers, having yet to appear in any regular season. He made his SC2 televised debut in GSTL March. PuMa has since been a significant player in the team leagues for TSL.

On July 20, 2011 it was announced PuMa had left TSL and was planning to join Team Evil Geniuses.[1] As of July 21, PuMa was not yet signed by EG.[2] On the 26th, Evil Geniuses Executive Director, Alex Garfield, announced on the TL Forums that PuMa had been officially signed by EG.[3] On October 21, 2011, Evil Geniuses announced that both HuK and PuMa will live on a permanent basis at the SlayerS house in Korea as the result of a training partnership.[4]

PuMa attempted to qualify for Code A in the 2012 GSL Season 1 Code A preliminaries. He would lose in the finals to Sniper.

On March 21, 2011, for the 2011 GSTL March, Team SCV Life sent out PuMa as their third player against fOu. The score was in favor for TSL at 3-2 at that point. PuMa's victory furthered TSL's lead at 4-2 and gave TSL the victory.

On May 16, 2011, for the 2011 GSTL May, Team SCV Life sent out PuMa as their starting player against fOu. PuMa took out Lucky and put TSL in the lead by a score of 1-0. fOu sent out GuMiho next and PuMa wasn't able to defeat him. PuMa's loss allowed fOu to tie up the score at 1-1.

On June 30, 2011, for the 2011 GSTL Season 1 Group A, Team SCV Life sent out PuMa as their second player against Prime. The score was tied at 1-1 for both teams at that point. PuMa was able win three games in a row and defeated BBoongBBoong, MarineKing, and Polt and gave TSL the victory against Prime by a score of 4-1.

On June 22, 2011, PuMa participated in the ESV TV Korean Weekly Season 1 Weekly 2. After taking down KingKong, Tiger, CoCa, and Sage, PuMa advanced in to the finals to face Puzzle. In the finals, PuMa defeated Puzzle by a score of 4-1 and grabbed first place.

On June 29, 2011, PuMa participated in the ESV TV Korean Weekly Season 1 Weekly 3. After taking down Seed, Clide, YongHwa, and Sage, PuMa went on to face ByuN. He was not able to advance any further after he lost to ByuN by a score of 2-3 and fell in to the 3rd/4th place match. He was able to defeat Min by a score of 2-0, and was able to take third place.

PuMa began to compete in some online tournaments, placing first in the NASL Season 1 Open. This would qualify him as the final seed for the NASL Season 1 playoffs. At the NASL Finals live event he went through the likes of Ret, Squirtle and July before meeting and defeating MC in the finals to secure first place.

PuMa also participated in MLG Raleigh for his MLG debut. He dominated his way through the open bracket and managed to go 5-0 in his group before losing to CoCa in the Championship round and then again to NaDa to finish in 5th place overall.

PuMa played in MLG Orlando where he placed second in his group below Bomber. He would beat Polt 2-0 in the Championship Bracket before losing to MC 1-2 in the following round.

PuMa returned to NASL for Season 2, where he finished at the top of his division with a record of 6-1. This record qualified him for the Finals. In the finals, Puma ran through Zerg Sheth, teammate IdrA, and Terran ThorZaIN to reach the finals, where he met HerO. PuMa defeated HerO 4-2, and managed to maintain his status as NASL champion.

In 2012 PuMa participated in ASUS ROG Winter 2012 at the Assembly in Finland. He made it to the semifinals where he lost to Stephano 3-0, and then swept Lucky 3-0 to take 3rd place.

It was announced on August 10 that PuMa was invited and would be participating in IEM Global Challenge Cologne.[5] In this tournament, he was surprisingly defeated 2-0 by MaNa in group stage, but still managed to get a spot in the main bracket. He knocked Nerchio and Socke out of the bracket in a dominating fashion, defeating them both 3-0. PuMa eventually faced MC in the final, in a remake of the NASL Season 1 finals. This time, PuMa totally overwhelmed his opponent, and defeated him 3-0.

From March 6 to March 10, 2012, PuMa participated in the IEM Season VI World Championship. The tournament started off with group stages. PuMa was placed in to Group C with Killer, Zenio, SeleCT, DIMAGA, and MaNa. PuMa advanced out of his group with a score of 5-0 and headed in to the playoffs bracket. In the playoffs bracket, PuMa started off the first round with a BYE and then went on to defeat JYP and MMA in order to advance in to the finals. In the finals, PuMa faced MC. He lost to MC by a score of 2-3 and ended up in second place.

On February 11, 2012, PuMa participated in the IPL 4 Online Qualifiers 1. PuMa started off from the round of 64 and defeated Guillycuddy, Symbol, Noblesse, Alicia, Oz and then advanced in to the finals to face aLive. He lost to aLive in the finals after losing by a score of 0-2 and ended up in second place. He was still able to qualify for the IGN ProLeague Season 4.