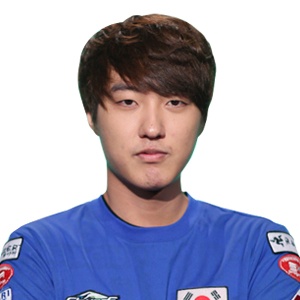 Kim "Puzzle" Sang Jun is a Protoss player from South Korea. He had retired from professional StarCraft II, initially deciding to play League of Legends competitively. He returned to competitive StarCraft II in April 2013 and signed with KT Rolster the 26th of April 2013.[1] He is currently retired.

Puzzle is a former Brood War player who was the first overall draft pick in the 2009 Mid-Year KeSPA Draft.[2] He was on the team WeMade FOX and transitioned into ZeNEX when he switched to SC2.

Puzzle's first notable achievement in Wings of Liberty was his performance in the Zotac Team Invitational, Season 2 in January 2011. He scored two all-kills against oGs and IM and obtained the highest number of set wins with a record of 13-4. Puzzle had also been a consistent player in the GSTL seasons for ZeNEX.

After many rumors and speculations, it was revealed on September 2, 2011, that Puzzle had joined SlayerS.[3] Puzzle retired from StarCraft II and switched to League of Legends in October 2012, as SlayerS disbanded.[4]

Although struggling to play in the GSL, Puzzle finally broke into GSL July for Code A. There he would eliminate MMA in the first round in a major upset, before moving on to the finals undefeated, eventually taking the tournament 4-2 over Tassadar by winning four games in a row after dropping the first two sets.[5] This would secure him a Code S position in the next GSL.[6]

Puzzle's first Code S season was GSL August. He advanced to the Round of 16 after placing second in his group by knocking out teammate ByuN and scoring a revenge kill against asd in a long PvT on Daybreak. He faced off against fellow Code S newcomer Ryung in the next round, losing 0-2, ending his Code S debut. In GSL October, Puzzle would place last in his group with a score of 0-2, therefore needing to play in the Up and Down Matches. He would go 3-1 in his Up and Down Group, only losing to GuMiho, thus staying in Code S.

During the 2011 GSL November, Puzzle would show strong games, only losing one game to HuK during the winners' match in the Round of 32. In round of 8, he played against jjakji, but lost 0-3.

In the Round of 32 in the 2012 GSL Season 1 Code S, Puzzle lost to PartinG but defeated NaDa twice to enter the Round of 16. There he would defeat SuperNova and MMA to advance to the Round of 8.

On June 22, 2011, Puzzle participated in the ESV TV Korean Weekly Season 1 Weekly 2. After taking down Clide, Line, jjakji, and San to advance in to the finals to face PuMa. He was not able to advance any further and lost to PuMa by a score of 1-4 and ended up taking second place.

On July 27, 2011, Puzzle participated in the ESV TV Korean Weekly Season 1 Weekly 6. After taking down TopClass, MarineKing, aLive, and GuMiho, Puzzle went on to face jjakji. He was not able to advance any further after he lost to jjakji by a score of 2-3 and took third place.

On August 17, 2011, Puzzle participated in the ESV TV Korean Weekly Season 1 Weekly 7. After taking down IsSuE, kAsyu, Crane, and TaeJa, Puzzle advanced in to the finals to face cOre. In the finals, Puzzle defeated cOre by a score of 4-1 and grabbed first place.

On September 27, 2011, Puzzle participated in the ESV TV Korean Weekly Season 1 Weekly 10. After taking down Classic, inori, Daisy, and Lots, Puzzle went on to face TaeJa. He was not able to advance any further after he lost to TaeJa by a score of 2-3 and fell in to the 3rd/4th place match. Puzzle once again wasn't able to grab any more victories and had to settle for fourth place after losing to BBoongBBoong by a score of 0-W.

On July 12, 2012, Puzzle participated in the ESV TV Korean Weekly Season 3 Weekly 8. Puzzle took down TheStC, SSanaEE, True, and horror, Puzzle advanced in to the finals to face YongHwa. In the finals, Puzzle defeated YongHwa by a score of 3-1 and grabbed first place.

Puzzle's first event outside Korea would be at MLG Providence. He played in the Open Bracket, falling to HerO in Round 3, then to teammate GanZi in the Losers' Bracket Round 6 which ended his run in the tournament.

On July 22, 2012, Puzzle participated in the 2012 South Korea WCS Preliminaries. Puzzle received a BYE in round one and then took down 이제현, 김지황, Harrier, and faced Sniper in the finals. After taking down Sniper by a score of 2:0, Puzzle advanced in to the World Championship Series: South Korea Nationals.

On July 2, 2012, Puzzle participated in the 2012 OSL Non-KeSPA Preliminaries. Puzzle received a BYE in round one and then took down 이제현, SalvatioN, Avenge, and faced PartinG in the finals. He was not able to advance any further and had to take 2nd place after he lost to PartinG by a score of 1:2.

Puzzle's first Heart of the Swarm tournament, and his first appearance since returning to professional Starcraft II, was 2013 DreamHack Open Stockholm through a sponsorship by Project Dark Horse alongside his former teammate CoCa.[7] He was seeded into the second group stage, where he defeated Ziktomini and elfi to advance. In the third group stage, he defeated SortOf, Strelok, and Center to reach the bracket stage, where he lost 0-2 to HerO.