Pylon (Legacy of the Void)

This article covers the current multiplayer version of this building. For another version see Pylon (Wings of Liberty and Heart of the Swarm). 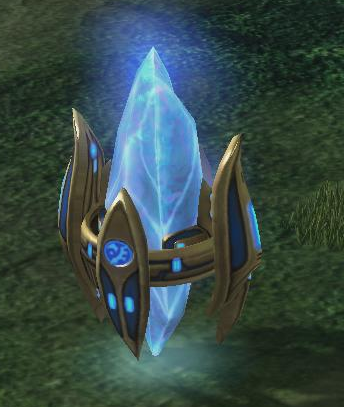 The Pylon is the Protoss supply building and the primary source of the Psionic Matrix power field. After warping in, the Pylon is surrounded by a circular field of the Psionic Matrix, providing power to nearby structures and enabling units to warp in on demand from Warp Gates within a radius of 6.5. Each Pylon also provides 8 Psi supply points.

Almost all Protoss buildings must be initially warped in on the map within the Psionic Matrix. (The only exceptions are the Nexus, Assimilator, and the Pylon itself.) If the Matrix is removed (due to, for example, the destruction of a Pylon), any structures in the area will become unpowered and cease to function. It is therefore important for Protoss players to ensure that their infrastructure is powered by sufficient Pylons to prevent opponents from shutting down a large portion of their base with the destruction of a single, critical Pylon. However, if a building is a prerequisite for the construction of other buildings or units, the prerequisite is still met while the structure is unpowered. 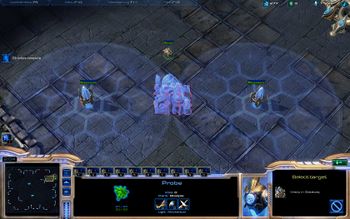 Note that buildings need to be powered by a single Pylon, they cannot use the combined fields of two or more Pylons to be powered.

Changes in Legacy of the Void[edit]

If a pylon is close to a Warp Gate or a Nexus (even a building Nexus), then the duration of the warp-in is shortened to 3.6 seconds (5 seconds at Normal speed). 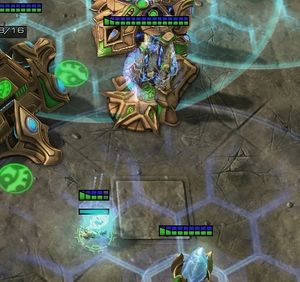 If the pylon is far from a Nexus or Warp Gate, then the standard warp-in duration applies. In the following example, even if the Psionic Matrix of the Pylon touches the Nexus, it is actually too far, and the Zealot warps in 11.4 seconds (16 seconds at Normal speed). 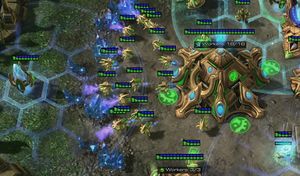 Apart from the obvious uses of Pylons, that is to provide Psi and power, Pylons have other uses in competitive gaming.

A common technique employed by Protoss players is to construct Pylons at key areas on the map, for example, around the outer edges of their base. This provides a wide visual perimeter that provides the player with advance warning against harassment attempts or air attacks.

Pylons can also be placed in other parts of the map, like in common flight paths or possible enemy expansions in order to provide scouting information.

Pylons are also frequently used as parts of building Walls to make a choke point narrower and easier to defend. See the related article for more details about Walling.

Since the Protoss Warp Gates have the ability to warp in units at any point of the map not obscured by fog of war where the Psionic Matrix is available, building "proxy" Pylons at locations close to a point of engagement is commonly used by Protoss players to quickly reinforce their army, reducing transit time.

Not requiring the existence of a Probe nearby after they have started building and being relatively cheap, Pylons are often used as a way of harassing the opponent. The most frequent application of this is the construction of a Pylon at a Zerg Player's natural expansion, preventing Drones from morphing into a Hatchery at that location.

Other similar uses include the construction of Pylons to prevent a Terran player from completing a wall or creating an add-on.