Queen (Legacy of the Void)

This article covers the current multiplayer version of this unit. For another version see Queen (Wings of Liberty and Heart of the Swarm). 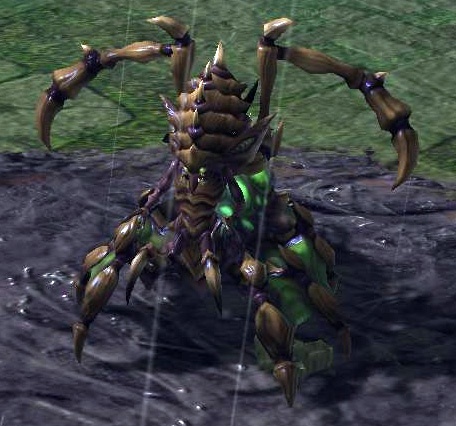 The Queen is an essential unit for the Zerg base, capable of being spawned from any Hatchery after a Spawning Pool has been built. The unit provides light defense against both ground and air threats. Additionally, building a Queen allows the player to access the beneficial spells of Spawn Larva, Spawn Creep Tumor and Transfusion. Zerg players typically produce at least one Queen for every Hatchery because Spawn Larva substantially increases larvae production.

The Queen's combat AI prioritizes its stronger air attack against anti-ground airborne threats such as the Banshee, Oracle, or Colossus.

Spawn Larva is the most powerful ability at the Queen's disposal. At every possible chance, the Queen's energy should be used to spawn additional Larva at a particular Hatchery. One Queen will recover enough energy to constantly spawn Larva at one Hatchery. This ability increases the capacity of Zerg to produce any type of unit. As a general rule of thumb, each base the Zerg obtains can support one Hatchery with a Queen and its Spawn Larva ability. There is a limit of 19 Larvae per Hatchery; any extras spawned will cause Larvae to die, bringing the count back to 19.

The Spawn Creep Tumor is a less prioritized ability of the Queen, as Spawn Larva is a more essential ability, but it is still a commonly used and powerful ability. Creep Tumors allow Zerg players to extend their creep, which can be used to create creep 'bridges' between expansions for faster reinforcements, to spread creep on key areas of the map that might require Zerg to be more mobile, or to bring Spine or Spore Crawlers to a more forward position. This ability can be used in place of the Overlord's Generate Creep ability.

Tumors allow Zerg players to creep up their entire side of the map without the risk of exposing Overlords to fire. Another benefit of this ability is that once a tumor is placed, it can spread itself indefinitely by creating new tumors around the map, assuming the 'live' one is not killed. Once the tumor is created, it becomes burrowed, gives large vision radius and spreading more creep.

For faster creep spreading via tumors, you can create multiple tumors, or use Overlords to generate creep at the maximum range of the tumor so that you do not need to wait for the creep to spread normally.

Transfusion is the least used ability of the Queen. Because all Queens are generally below 25 energy due to constant usage of Spawn Larva, Queens usually don't have the energy for Transfusion. However, Transfusion can be useful for units with high hit points such as a Brood Lord, an Ultralisk, or on occasion another Queen, as well as saving buildings that are low on health. Using Transfusion on buildings is particularly useful, because although structures regenerate health at the same rate as Zerg units, their greater HP means that structures take much longer to recover to full health.

Multiple applications of Transfusion in rapid succession each heal for 75 health, but the 50 health over time effect does not stack, i.e., will be applied only once.

An efficient Zerg player will spawn Larva at each of their bases every 40 seconds, virtually without exception. This requires both discipline and attention. Furthermore, you need to spend as little time as possible doing this, or at least keep it from taking up too much of your attention. Fortunately, there are tricks which make spawning Larva easy, fast, and require little attention. All of these tricks rely on the Queens' smart cast: make sure to group all of your Queens in a control group.

Select your Queens. By pressing Backspace, you will center on your first Hatchery. Spawn Larva, then press Backspace to move to your next Hatchery and Spawn Larva again, and so on.

You can make this much faster by first placing your cursor at the middle of the screen. Select your Queens and press V once to activate the Spawn Larva spell, then press and hold the Shift key to stack the spell. Now, while holding Shift, press Backspace and click on your first Hatchery, press Backspace again and click on your second Hatchery, and so on. This key may be rebound in the Hotkeys menu to any key of the player's choice for ease of access.

This method is both quick and easy, and requires very little micro skill or coordination. Its main drawback is that it will take your visual focus away from the action.

As described and recommended by The Little One on Day(9)'s Day(9) Daily #219 - Friendday Wednesday with TLO. This trick is conceptually very easy, but a bit harder to execute. It relies on the fact that the Spawn Larva ability can target units (a Hatchery) on the minimap. To execute this trick, simply select your Queens, launch the Spawn Larva Spell, and click on the big square on your minimap representing your Hatchery. Repeat as required.

Hatcheries are actually pretty big on the minimap, and since they are the only viable target, they are pretty easy to target (your cursor will be green when you hover the Hatchery to confirm a legal target). The huge advantage of this technique is that it can be executed without moving your focus. This means that even if you are in the middle of a battle, you can take 1 second to spawn your Larvae, without taking your eyes off the battle.

If there are both ground and air targets of equal priority within a Queen's weapons' ranges, the Queen will prefer attacking the air unit unless it is given an attack command specifically targeting the ground unit. This behavior is the same for the Thor, which also has split anti-ground and anti-air weapons.

With a few exceptions, Queens and Thors will attack targets in this order:

Note that this list assumes all potential targets to already be in range. For example, when attack-moving towards a Roach sitting directly underneath an Overlord, the superior anti-air weapon range will cause the Queen to stop moving at a distance of 7 units and start attacking the Overlord, with the Roach remaining out of range.

A Queen should be placed at every Hatchery in all match-ups, and should utilize Spawn Larva constantly. If a Queen misses a Spawn Larva, the excess energy should be used to place a Creep Tumor, which can spread indefinitely, provided the live one isn't killed.

It can be used to kill an early scout in lieu of two Zerglings.

If you scout a quick air-tech against any race and you are unprepared, spawning additional Queens can help defend imminent rushes. Coupled with Transfusion and ~100-150 energy, you can easily survive at least 3-4 Void Rays/Banshees. It should be noted that this is not an alternative to getting Hydralisks for air defense but rather a temporary solution to early harass.

Producing an extra Queen or two can help save resources; multiple Mutalisks can be restored to full health with Transfusions after an harassment. Due to the high value of Brood Lords, bringing Queens to the front line has become more popular - provided creep has been spread appropriately throughout the game. The Queen's lack of common attributes (i.e. Light or Armored) combined with a relatively large amount of HP and extended by Transfusion(s) make for a surprisingly good tank; being nothing but biological and psionic, it only receives bonus damage from Archons and the Ghost's Snipe.

Queens are useful to defend fast expansions as well as defend against Void Ray rushes. Generally, 1.5 Queens are necessary to counter each Void Ray, or 1 Queen and 1 Spore Crawler for each 1.5 Void Rays.

Queens are often the key unit in defending an early rush/harassment from a Terran player, and proper management is crucial to minimize losses. They can be used to defend drones from Reapers or Hellions attempting to enter the Zerg's mineral line to kill drones. Queens can be used to deter Vikings that venture too deep into the Zerg player's creep, and can stand their own against Banshee attacks (with detection), Raven harass, or drops when used in combination with Infestors.

The Queen is the heart of Zerg production in this match-up. Since each Queen is worth more in production than an additional Hatchery and because Queens are often so vulnerable, sniping enemy Queens can provide a significant advantage early on. Since ZvZ tends to be the shortest of all match-ups, forcing the opponent to spend an additional 150 minerals, lose 1 round of injection, and spend 50 seconds build time puts the aggressor at a massive advantage.

It also becomes necessary, then, to make sure the Queen is protected. Although Spine Crawlers are decent at defense, they are not enough to stop a flood of Zerglings from destroying the Queen. Therefore, the most common way of defending a Queen is to surround it with a Roach wall (with the Queen and Roaches on hold position), as Queens require very little movement to do their work.

Drones may also be right clicked onto the Queen, causing them to circle around the Queen. This causes enemy Zerglings to circle around the Drones because their targeting AI will prioritize the attacking Queen and not the non-attacking Drones. This will require your opponent to individually target Drones or hold position in order to attack them.

If the opponent does not remove their scouting Overlord from your base, the Queen should be able to kill the Overlord with relative ease.