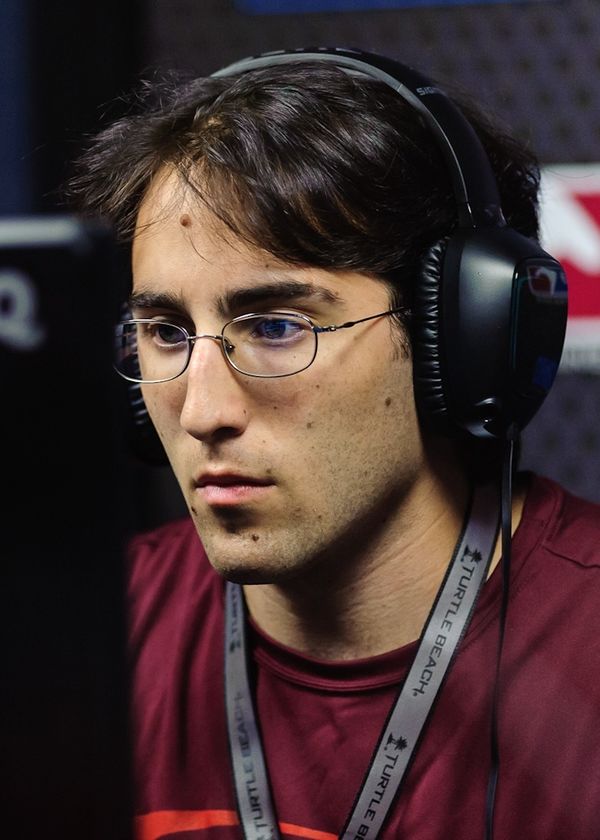 qxc played as Terran in Brood War and currently plays as Terran in StarCraft II. qxc is currently a part of the e-sports team compLexity Gaming and is known for his 1 Rax Marauder build. He is also known for popularizing the Reactor Hellion Expand (vs. Zerg) as well as having a very strong mech play vs. Zerg. qxc has also created the Ghost First (vs. Terran) build.

qxc has slightly unorthodox play. He's not afraid to experiment (Viking drop from Medivacs) and he is able to think on his feet more than others. He is known for constant aggression through harass; taxing his opponent's multitask abilities.

qxc was a relatively unknown player from StarCraft: Brood War. qxc has reached a high of B on iCCup and has participated in many Clan Wars and iCCup tournaments but has not participated (and placed) in any major Brood War tournament. qxc played for The American Dream Team on iCCup as TAD[zz] and participated in iCCup Clan League with said team when not playing SC2.

qxc has also played as the ACE for Harvey Mudd College in the Collegiate Star League [CSL] since the beginning (this got him into the StarCraft: Brood War scene). qxc has gotten into the final four of the CSL Individual Tournament (Season 3) losing to Jaeyun (David Kim) 2-3 and not making the finals. In the team tournament, qxc has an outstanding record of 7-0, winning every single game in West Division 4 (West Division of Death - UCSD, UCI, Berkeley, etc.) during Season 3. qxc is considered the strongest Terran player in the Collegiate Star League.

A relatively unknown player from Brood War, qxc has performed well in beta, winning GosuCoaching Weekly #4 along with Triple Strike Team Cup multiple times (first as Team Assembly and later as part of ROOT Gaming). At the end of patch 12, qxc is ranked 2nd in Platinum (according to www.StarCraftrankings.com) with a StarCraft II rating of 2263 points and a 105-32 (76.64%) record on the US servers. Note that the Diamond League was implemented in Patch 13.

qxc also played in the TeamLiquid SC2 Invitational 2, where he lost to

As a reward for his beta success, qxc was invited to Day[9]'s King of the Beta tournament where he advanced first in Group A into the semifinals but lost to IdrA 0-3.

While attending Harvey Mudd, qxc continued to attend MLGS following up his 9th place finish at Raleigh with a 9th place finish in MLG D.C.. He followed DC up with a 13th place finish in 2010 MLG Pro Circuit/Dallas. Because of qxc's focus on studies his results started to decline. Since he qualified through the American Championships qxc went to IEM Season V - World Championship where he would go 0-5 in his group and finishing with a 7-12 finish. Later qxc played in 2011 MLG Pro Circuit/Dallas where he was placed into Pool B and went 1-3. He would then face off against then team mate Sheth and lose 0-2 for a 21st place finish in the first MLG of the year. Due to his first place finish in the TeamSpeak TL Open 13 he would be able to participate in the TSL3.qxc managed to defeat his first opponent 2010 Blizzcon champion Genius, 2-0. He would then lose a very close series to Adelscott 2-3. qxc then attended 2011 MLG Pro Circuit/Columbus where he fought through the winner's open bracket defeating Complextity Gaming's Ryze before being knocked the loser's bracket by ThorZaIN. In the loser's bracket he would defeat Trimaster and then former team mate CatZ. He would be seeded into the championship bracket where he beat Axslav 2-1 and lost to SeleCT 1-2. Ending his run with a 26th place finish. qxc then went to 2011 MLG Pro Circuit/Anaheim again he would place through the open bracket defeating notables HDStarcraft, HasHe,then team mate SLoG before being defeated by Rain 1-2 and would the be knocked down to the loser's bracket where he was defeated 1-2 by DeMusliM. After his Anahiem finish qxc announced that he wouldn't be participating in any more MLG's for the rest of the year to focus on studies.It was announced on December 1, 2011 that qxc had parted ways with FXO on amicable terms due to differences in vision and focus, and would be joining compLexity Gaming—reuniting with old teammates CatZ, Drewbie, and Minigun.[1]

qxc has also stated his intentions to train in Korea, applying for the GomTV Code A Foreigner House in January 2011.[2] In the summer of 2011, qxc participated in GSL July Code A qualifiers and got knocked out in third round by DongRaeGu.[3][4] Nevertheless, a few weeks later, on July 22 in the 2011 GSTL Season 1 Venus League Week 5, qxc finally earned a notable achievement in Korea - in fact, one that has yet to be matched by a foreigner - when he pulled off an all-kill on Incredible Miracle, defeating horror, BBi, dreamertt - whom qxc mimed a Dragon Ball Kamehameha at in a ceremony after their set - and even Mvp. qxc tried to qualify for GSL August, but was once again unable to qualify. However, he remains the only foreigner (and North American and American within that) to pull off a GSTL all-kill to date (F.United pulled off a combined Swedish all-kill that same season against MVP thanks to ThorZaIN and NaNiwa.)

qxc graduated from Harvey Mudd on May 14[5] and has stated in interviews that he will be going full-time. His first tournament appearance will be MLG Spring Championship[6] where he will be fighting his way through the open bracket.

From August 20 to August 21, 2011, qxc participated in the IPL Season 3 Qualifier 1 qxc started off from the Round of 64. qxc defeated Cursed, Mkengyn, Artist, and AcE, in order to advance in to the semifinals to face Sleep. He wasn't able to defeat Sleep and fell down to the 3rd/4th place match. In the 3rd/4th place match, qxc found even more misfortune as he lost to Sheth by a score of 0-2 and ended up taking fourth place.

On July 14, 2012, qxc participated in the IPL 5 North American Satellite Qualifiers. qxc received a BYE in round one and then went on to take down Days and Chrono, and then went on to advance in to the finals to face Suppy. In the finals, qxc defeated Suppy by a score of 2-1 and was able to take first place. His first place finish qualified him for the IGN ProLeague Season 5.

On May 4, 2013 qxc participated in the WCS AM Challenger League Qualifiers. After initially beating Kiom he was knocked down to the losers bracket by MacSed. There he defeated brent in his first match, but he was then knocked out of the tournament by Ian.

From June 28 through June 30 of 2013 qxc participated in the 2013 MLG Spring Championship. Placed in bracket 7 of the Winners Bracket qxc started off with a good run, beating Shananigans, Grubby, and Tilea. He was knocked down to the 8th bracket in the Losers Bracket after losing 2-1 to Dear, where he beat theognis 2-0 to advance to the Final Bracket. Unfortunately, he lost his first match to TheStC 2-0 and was knocked out of the tournament in 13-16th place.