To read about the Korean Protoss, see Rain 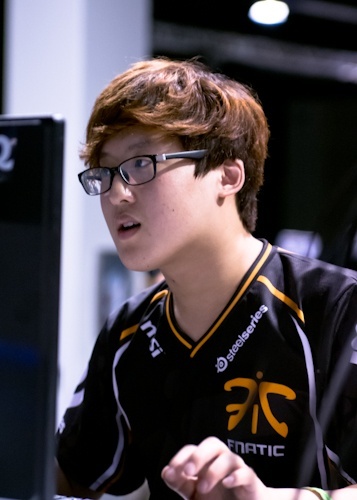 Rain worked for some time for World Cyber Games,[1] and in 2014, he started studying in Sacramento.[2]

On June 14, 2011, Rain announced that he had left Team SCV Life.[3] Ten days later, it was announced that Rain had joined Fnatic and would be moving to the United States.[4]

On August 9, 2012, Rain participated in the ZOTAC Cup Monthly Final July. Rain took down Forsen before he fell down to the 3rd/4th place match after losing 0-2 to Nerchio. Rain took down sC by a score of 2-1 and took 3rd place.

Rain debuted as part of Team SCV Life in the GOMTV GSL second open season where he was knocked out by Ensnare in the Round of 32.

Rain re-qualified for the GSL Open Season 3 and managed to reach the finals of the tournament, his most successful result to-date. Although managing to defeat Genius 2-0 in the Round of 32, Rain went fairly undetected until the Round of 8. Rain was criticized for his overuse of cheese against Genius, as well as cheesing on Delta Quadrant against Squirtle (despite the fact that a force field essentially negates the rush, Squirtle barely missed his force field). In Ro8, Rain pulled a 3-2 controversial upset over the previous season's champion NesTea. By performing 2 SCV/Marine all-ins, and with his 3rd win being due to a bunker rush, he instantly received a huge amount of negative feedback from both the foreign and South Korean community who doubted his ability to win without cheese. Rain publicly apologized for his style and cited a lack of time and preparation for his rush decisions and promised to perform a more macro oriented play.[5] In the following round for the semifinals, Rain would show a more diverse and versatile style against HongUn, eliminating him convincingly 4-2. In the finals, Rain would manage to take one set off the heavily favored MC, but still fall 1-4 to the Protoss player.

In 2011 January GSL, Rain Participated in the Code S tournament, but was eliminated in Ro32 1-2 after defeating Choya, but being defeated by Kyrix and Tester. Rain took 4th place because he was defeated by the 3rd place Kyrix, who also went 1-2. Being the 4th place player, he had one chance to stay in Code S in the Up and Down matches. His group consisted of Kyrix (a coincidence that they were in the same group again) and July. After Kyrix defeated July, Rain had to play against July, but was defeated 0-2. He ended up gaining another shot to join Code S after LiveForever announced that he was entering military service. To replace LiveForever's Code S spot, a Wildcard tournament was held between the 8 players who were knocked down to Code A from the Up and Down matches. Rain was defeated in the first round 0-2 by Moon in the Wildcard tournament.

Rain entered Code A for the March tournament and managed to scrape out a quarterfinal finish, allowing him to play the Up and Down matches once again for Code S. Although he would lose to TOP, he would best Hyperdub, making him the first demoted player to reach promotion.

In the group drawings for 2011 July GSL, Rain decided not to participate, forfeiting his Code S spot.[6] This would later prompt GOM to penalize Rain, suspending him from GSL events for 2 seasons.[7]

On February 9, 2011, for the 2011 GSTL February, Team SCV Life sent out Rain as their second player against StarTale. The score was in favor for ST at 1-0 at that point. He wasn't able to take out ST's AcE and allowed ST to take the lead at 2-0.

On June 15, 2012, for the 2012 GSTL Season 2 Round 2, Fnatic sent out Rain as their starting player against Prime. He wasn't able to take out Prime's AnNyeong and allowed Prime to take the lead at 1-0.

On July 13, 2012, for the 2012 GSTL Season 2 Round 2, Fnatic sent out Rain as their second player against SlayerS-EG. The score was in favor for SlayerS-EG at 1-0 at that point. He wasn't able to take out SlayerS-EG's JYP and allowed SlayerS-EG to further their lead to 2-0.

Rain's first major debut in a non-Korean tournament would be at MLG Anaheim 2011 where he fought through the Open Bracket and into Pool Play. There, he placed first in his group going 5 - 0, defeating the likes of MMA, Ret, SLush, Socke and Drewbie. In the Championship Bracket, Rain lost 2 - 1 to BoxeR and then lost 2 - 0 to GanZi in the Loser's Bracket, finishing in 6th place overall in the tournament.[8] Rain participated in MLG Raleigh 2011 as a seeded player in pool play due to his success at Anaheim.[9] At Raleigh, he went 3-2 in pool play losing to CoCa and HuK. He beat Machine in the championship bracket, but ultimately fell to SjoW.

Rain was an invite to the 2011 Dreamhack Valencia Invitational, where he reached the semifinals after defeating NaNiwa before losing to DongRaeGu.

Rain played in MLG Orlando where he was seeded into Pool C. He placed fourth in his group going into the Championship Bracket and managed to beat DdoRo there before losing to MC in his next match.

Rain also played in MLG Providence, but was defeated in back-to-back series by Mvp and MarineKing.