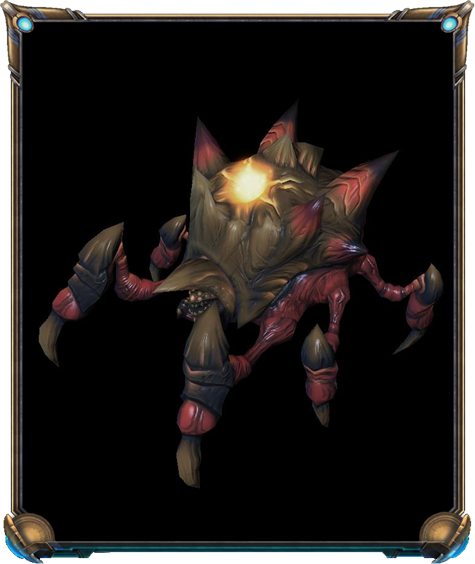 The Ravager is a ranged Zerg ground unit introduced in Legacy of the Void. It morphs from the Roach any time after completing a Roach Warren; but is not an Armored unit like its previous evolution. It has a higher range and speed along with a faster attack for more damage, but slightly less health.

"This monstrosity wields plasma fire both in close-quarters combat and as a wedge to crack open entrenched positions, something the Swarm struggled with in the past. Its heavier frame isn't subtle, but has the ability to launch large gobs of Corrosive Bile at distant targets." This creature has smartly adapted to the problems of the Sentry's Force Field ability and defensive structures, both being crushed by the Ravager's ability. The ability ignores armor which makes it extra effective.

Corrosive Bile has 9 range and lands approximately 2.5 seconds after being launched. It deals damage to air units and ground units at the same time.

If a Protoss player tries to block his ramp using Force Fields, the Ravager can destroy it using Corrosive Bile. As a result, Sentries are less common in ZvP, except in early timing attacks with other basic Gateway units.

Ravagers are commonly seen in this matchup in many different areas. First off, they are good at holding early-mid game attacks, since they are generally composed mostly of the new Adept. Ravagers can stay out of range of the Adept and kite them with their Corrosive Bile ability and superior range. Ravagers are generally good against Protoss throughout the game, since the Protoss army tends to clump up, and the Ravager can easily increase the damage of the Zerg's army either by landing the bile ability or using it to force units to move, making them waste time that they could use to attack the enemy army.

A new strategy that involves Ravagers is a Zergling style that focuses on quick double upgrades into Ultralisks with Ravagers for supporting damage. If the Zerg player surrounds the Protoss army with Zerglings, Ravagers can melt the Protoss ball, since they cannot dodge the shots while they are surrounded. They are also found in Roach/Hydra forces since the bile can force the Protoss army to make unfavorable movements depending on where it is placed.

Despite Ravagers having greater speed than stimmed Marines on creep, they are the prime target of Disruptors. They have a much bigger size and collision which makes them hard to dodge the Disruptor's Purification Nova. If they are fighting against disruptors outside of creep, their base speed makes it even worse to dodge the novas. Corrosive Biles also take a longer time to hit the target point compared to the novas, which makes the engagement hard from the Zerg side which tends to dodge the balls all the time without dealing any damage back to the Protoss army.

Ravagers are key when holding off early Liberator attacks, as 3 Corrosive Bile strikes can destroy an immobile Liberator.

Ravagers are useful during the mass-Roach part of the game, for their Corrosive Bile ability and increased range over the roach (6 instead of 4) allows it to dish out extra damage. In smaller numbers of roaches, they are not recommended due to their lower health, higher cost, and because Corrosive Bile is easier to avoid. They can also be useful to slowly push back Lurker lines and Spine Crawlers and force them to unsiege. It can also be used to snipe Overlords early on with four Corrosive Bile strikes.