This article covers the now superseded Wings of Liberty multiplayer version of this unit. For other versions see Raven (Legacy of the Void) and Raven (Heart of the Swarm). 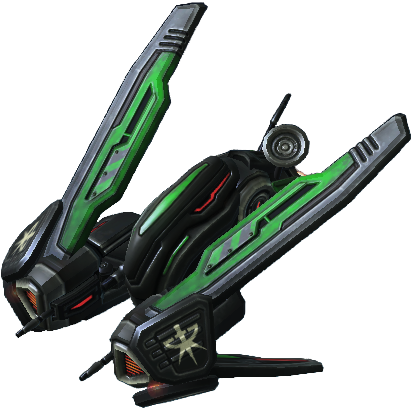 The Raven is a multi-purpose Terran air unit that can provide offensive as well as defensive capabilities. The Raven has four abilities that it can use to aid a Terran player in attacking the enemy or defending from attacks. The Raven is the spiritual successor to Starcraft:Brood War's Science Vessel.

Ravens are a useful addition to a late-game Terran army, particularly against Zerg players. Their detection can scout groups of burrowed units which is particularly useful at preventing Baneling traps and groups of Auto-Turrets can be used to block units and deal strong damage to groups of Zerglings. The Seeker Missile is also an effective spell and deals large AoE damage that can devastate large armies if used correctly. 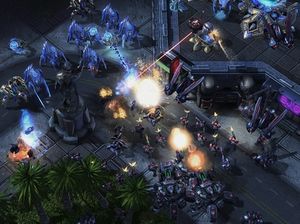 The Terran player uses Ravens to support his push during a TvP on Metalopolis.

Ravens are primarily used as mobile detectors in TvP, providing protection from Dark Templar, and allowing the Terran to destroy scouting Observers to limit the information gathering abilities of the opposing Protoss player. Despite this functionality, Ravens heavy gas cost limits their viability in a match-up which often requires expensive units such as Ghosts or Siege Tanks. This compounded by the Raven's inability to be used as strong counter to any specific Protoss unit, and its susceptibility to a High Templar's Feedback, a unit which is commonly used in TvP. 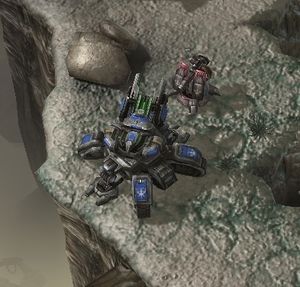 A single Raven forces a Siege Tank to unsiege or be destroyed on the high ground of Desert Oasis.

Raven TvT use is dictated by the opening builds of the two players, and the amount of gas they consume. They are commonly used to defend against early Banshee harass when paired with a defensive Viking. Ravens can also assist with early Marauder pushes, providing vision and protecting against similar armies. Ravens also provide mobile vision for Siege Tanks, allowing to hit targets previously unavailable. Because so much of the TvT army is reliant on gas, Ravens production is limited. 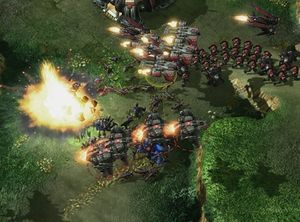 Hincram(T) uses his Ravens to attack SluSh's(Z) Roach / Zergling force during a game on Lost Temple.

Ravens have multiple uses in TvZ. One of the major benefits of Raven usage is its functionality as a mobile Detector. This allows the Terran player to defend properly against burrowed Banelings, Roaches, and Infestors, limiting the damage the Zerg units can cause. This mobile detection ability also increases the threat of the Terran push, because it allows the advancing army to remove nearby Creep Tumors, negating the bonus speed it provides to opposing ground forces. This is especially beneficial for Mech play, which is threatened by flanking attacks and surrounds. Because only a small or handful of Raven's are required for mobile detection, the Terran player can spend gas on alternate fighting units.